Huge disparities in GST carve up per capita: NT gets $13k per person, WA gets $760

Commenting on my post from earlier today, a colleague noted that, in per capita terms (rather than in terms of total amounts), three States and Territories, the Northern Territory, Tasmania and South Australia, do much better than Queensland in the redistribution of GST revenue (see chart below). If GST revenue were distributed to States and Territories on an equal per capita basis, and not adjusted for fiscal disabilities, each State and Territory would receive just under $2,500 per person in 2016-17, according to the Commonwealth Grants Commission (see 2016 Update Report). NT, however, receives around $13,200 per person, compared with Queensland which receives around $2,900 per person. WA, of course, with its strong mining production, is the biggest loser in the GST redistribution, only receiving around $760 per person in GST revenue. 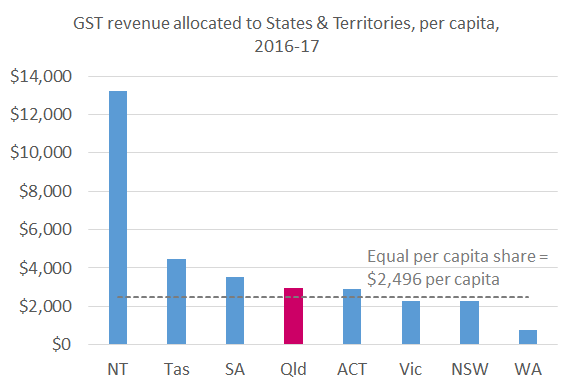