Queensland is the second biggest winner from the carve up of GST revenue that is dictated by the Commonwealth Grants Commission. In 2016-17, Queensland is to receive $2.1 billion more than we would if the GST revenue, which is collected by the Commonwealth on behalf of States and Territories, were shared equally per capita across Australia. That is, Queensland will receive $14.3 billion rather than the $12.2 billion we would receive under equal per capita shares. Only the Northern Territory does better from the GST carve up (see chart below). 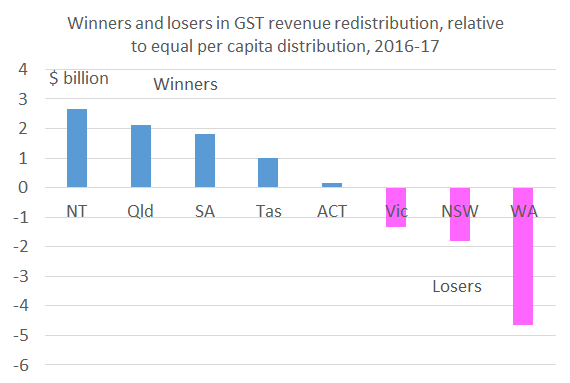 As I noted in yesterday’s post, GST is redistributed among States and Territories depending on their relative revenue-raising capabilities and expenditure requirements. Regarding revenue raising, Queensland is disadvantaged relative to other States and Territories by disproportionately smaller volumes of property sales, affecting stamp duty revenue, and business payrolls, affecting payroll tax revenue (see chart below). These disadvantages are partially offset by some revenue-raising advantages, including relatively substantial mining production (and some other factors that the CGC Update Report does not appear to elaborate on). 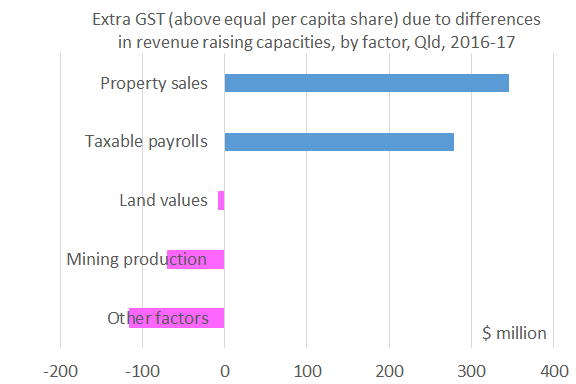 Regarding expenditure requirements that result in Queensland receiving more GST than an equal per capita share would provide, critical factors include our propensity for natural disasters, the remote or regional locations of many of our communities which are hence more costly to service, and our higher Indigenous population share (see chart below). 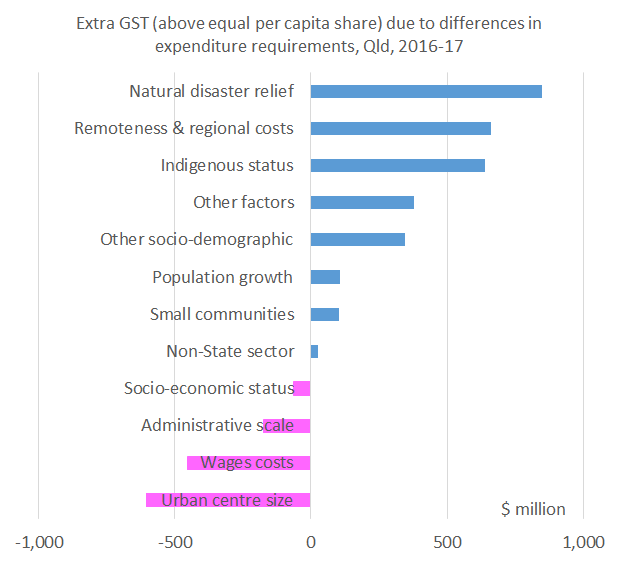 Finally, I need to clarify something I wrote in yesterday’s post regarding the movement of debt from the General Government sector to government-owned corporations (GOCs). When I wrote about debt sitting on GOC balance sheets not being matched by assets, I was referring to the additional transferred debt being unaccompanied by new assets (that is, it is just dumped on the GOCs; they did not voluntarily borrow the money to invest in new assets). I did not mean to suggest that the GOCs have total liabilities greater than their assets, which would imply negative equity, something which is not the case and which I did not mean to imply. I did, however, mean to imply that the GOCs’ financial positions have been compromised by the debt transfer.