Over the ten years to 2017, Queensland gained residents via interstate migration across all age groups, but it gained far fewer people in net terms in their twenties than you might expect (see chart below based on the relevant ABS.Stat data set). This could be related to Queensland not being as attractive a place as NSW or Victoria for young people to start their careers, which is reflected in the 20 to 29 year age group making an under-sized contribution to total net interstate migration (i.e. permanent arrivals to Queensland from interstate less departures interstate from Queensland). 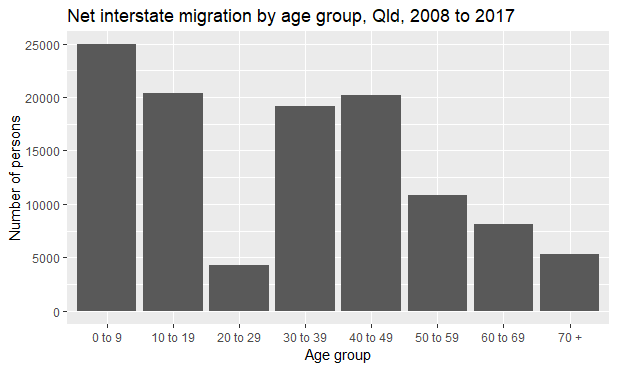 The issue of brain drain was raised in a comment by regular reader Mike regarding my post last week on Queensland’s higher-than-national-average unemployment rate. Queensland’s very low rate of net interstate migration among 20 to 29 year olds is associated with many young Queenslanders leaving for graduate and early career opportunities interstate, offsetting interstate arrivals to Queensland in this age group to a large extent. Certainly, the rate of departure interstate of 20 to 29 year old Queenslanders is higher than for their peers in NSW and Victoria, who benefit from a wider variety of graduate and entry-level career opportunities in their own states and have less incentive to migrate (see chart below). I should note the difference between the departure rates for Queensland and the southern states has trended down over time, possibly reflecting some improvement in career opportunities for young people in Queensland over the last two decades. 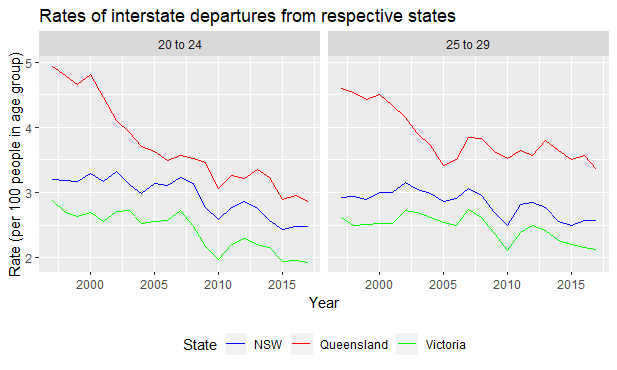 In the five years to 2017, Queensland actually experienced a net loss of around 1,400 people in 20 to 29 year age group via interstate migration (see chart below), which I suspect was associated with the end of the mining investment boom and public service staff cuts, as well as lacklustre economic conditions more generally.

Finally, I’d like to refer readers to an excellent post on interstate migration from Ross Elliott earlier this year:

Net interstate migration to Qld is on the rise: Does this mean we are about to boom?

In this post, Ross makes the point that rates of interstate migration to Queensland are still much lower than they were in the 1980s and 1990s. You can see this across all age groups from the late 1990s in the facet plot below which I’ve produced based on the data set I’ve analysed for this post. 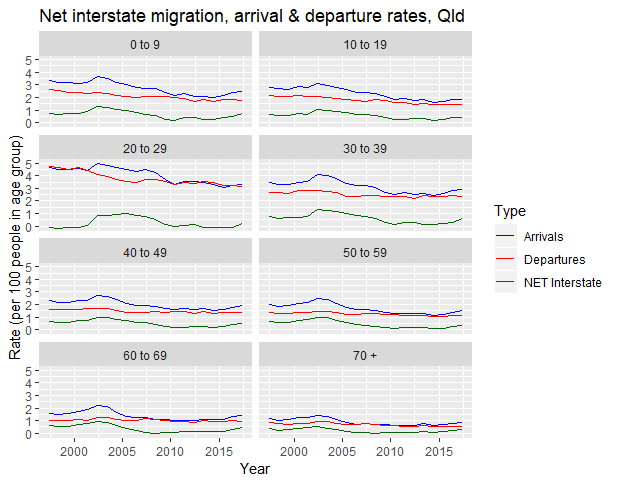