Michael Janda at ABC News has a good summary of the residential property price data for December quarter published yesterday by the ABS:

This correction has been a long time coming. Then RBA Governor Glenn Stevens warned about Sydney’s “crazy” house prices in mid-2015. Incidentally, following the Governor’s comments which were made at an ESA Queensland business lunch,  I set a UQ ECON2040 Macroeconomic Policy assignment on the implications for monetary policy of the housing price bubble. And in early 2017 I posted:

As I’ve noted in a previous post, Howard Marks’s 2018 book Mastering the Market Cycle is recommended reading on economic cycles and the implications for investing, and he is especially lucid on real estate (on p. 169):

Much of investing is subject to gross generalizations and sweeping statements—usually stressing the positives, because of humans’ tendency toward greed and wishful thinking—and for some reason this seems particularly true in real estate. Over the course of my career I’ve heard investment in real estate rationalized by easily digested statements like “they’re not making any more” (in connection with land), “you can always live in it” (in connection with houses), and “it’s a hedge against inflation”…What people eventually learn is that regardless of the merit behind the statements, they won’t protect an investment that was made at too high a price.

A lot of investors in the Sydney and Melbourne markets are learning that now, and we are now seeing an adverse wealth effect drag on consumption spending. Luckily Queensland property prices never reached the crazy levels they did in Sydney and Melbourne and falls in local property prices have been slight so far (see chart below), with the exception of inner-Brisbane city apartments. Partly, that would have been because we have had more mixed economic circumstances than other states in recent years. 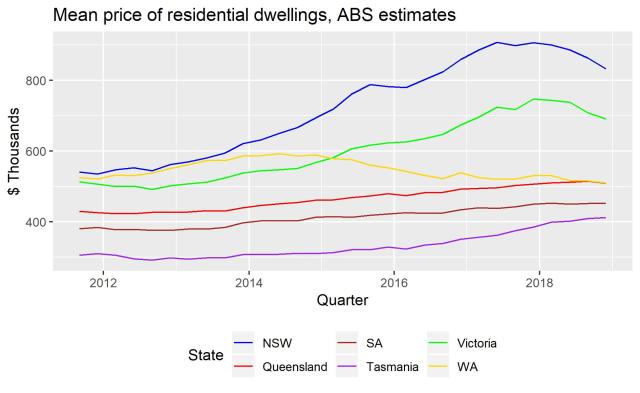 As I’ve noted before, I undertake my data analysis and charting using R, the data science programming language, which I can’t recommend highly enough. I’m trying to convert others to using R and am running an upcoming course:

Data science with R: Introduction with a focus on ABS economic data

If you regularly analyse and chart ABS data, I would recommend attending my training day and learning how you can save huge amounts of time in your data analysis and charting. The early bird registration fee expires this Friday.