YIMBY – Yes in my backyard

In my Brisbane Club presentation last Wednesday Qld: Hot or not? I commented on Brisbane City Council’s temporary planning instrument to restrict apartment and townhouse developments in low-density residential areas (e.g. see this Urban Developer article), saying I thought it was bad policy. Unsurprisingly, given I had an audience filled with property developers and real estate professionals, this was a popular opinion! After my talk, one seminar attendee told me about a group she had set up promoting higher-density development, YIMBY QLD, with YIMBY standing for “Yes in my backyard”. What a fantastic initiative. A good summary of the problems with planning policies discouraging higher-density development is contained in Brad Rogers’s excellent 2013 guest post Old Queenslanders in a New City.

Talking down the economy

After my QMCA presentation, I was asked whether all the negative talk from economists about the economic outlook could actually reduce business and consumer confidence so much that it brings about a downturn. That is, can economists deliver a self-fulfilling prophecy? I replied that I doubt it, given that economic commentary is contestable and that anyone without a sound basis for what they were saying would be shouted down and eventually ignored. Moreover, the economy tends to follow its own path and ignores the prognostications of even the most eminent economists. I noted one of the most infamous economic forecasts of all time, one which clearly had no real impact on the economic outlook, that of esteemed US economist Irving Fisher. In his classic account of the 1929 stock market crash, The Great Crash 1929, John Kenneth Galbraith commented:

That autumn Professor Irving Fisher of Yale made his immortal estimate: ‘Stock prices have reached what looks like a permanently high plateau.’ Irving Fisher was the most original of American economists. Happily there are better things—his contributions to index numbers, technical economic theory, and monetary theory—for which he is remembered.

Cairns-based financial commentator Mark Beath questioned whether tourism was “hot” in Cairns. Having had a closer look at the data for Cairns I can report that, while tourism in Cairns from domestic sources has experienced strong growth, there is a lot of concern over international visitor numbers. The Cairns Post reported at the end of last month:

Conus Business Consultancy Services partner Peter Faulkner has crunched the numbers and found an 8 per cent year-on-year drop in Chinese visitation to the region.

That compares to an 8 per cent increase Australia-wide.

Overall international visitor numbers were down 3 per cent in the Far North but up 6 per cent nationally.

Fortunately, domestic tourist numbers were up 15 per cent with expenditure rising 20 per cent, bringing the overall increase in tourism spending in the region to $3.4 billion year-on-year.

The Cairns Post’s description of the data isn’t entirely clear. Total spending in the Tropical North Queensland (TNQ)* tourism region was $3.4 billion in the 12 months to 30 September 2018, up around 12% from around $3 billion in the 12 months to 30 September 2017. These calculations are based on TEQ’s handy snapshots of domestic tourism and international tourism. Thanks to Mark for the question and for prompting me to have a closer look at the data.

Luke Dixon from AMP Capital, who also spoke at the Brisbane Club event, was asked whether Queensland’s economic growth rate was permanently at a lower level than it was in decades past. It certainly appears to be the case from eyeballing the data (see my chart from my QCMA presentation below). From 1987 to 2000, Queensland’s average annual economic growth rate was 4.7%. Since then it’s been 3.6%. 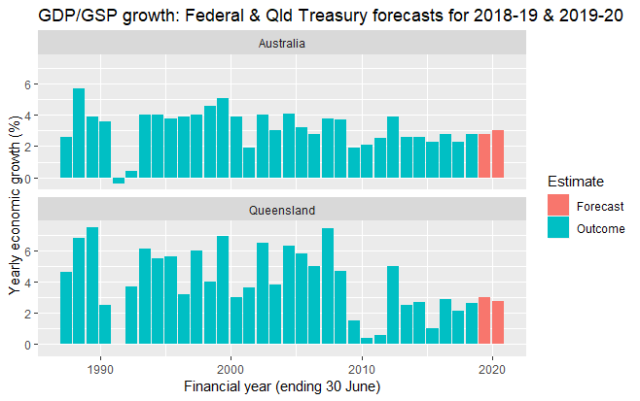 I also replied to the question, referring back to the 3P’s framework that Ken Henry popularised while Treasury Secretary. That approach stresses the supply-side determinants of GDP, that is the factors that are relevant in determining long-run GDP growth (as opposed to demand-side factors which can push an economy away from its trend growth path in the short run). Those 3Ps are participation, productivity, and population. The major contributors to GDP growth over the long-run are productivity and population growth, so I focussed on those two Ps.

We know that the population growth rate in Queensland is now much lower than it was in the 1980s and 1990s when interstate migration was at its strongest (see my chart below based on ABS estimates). Also we suspect the productivity growth rate has fallen since 2000. For instance, in the original 2002 Intergenerational Report and in the 2007 IGR, Treasury assumed long-run productivity growth at 1.75% p.a., but it has since revised that assumption to 1.5% p.a. So with lower population and productivity growth, it’s natural that growth rates of Queensland gross state product (GSP), the state equivalent of GDP, would be lower on average than they were in previous decades. 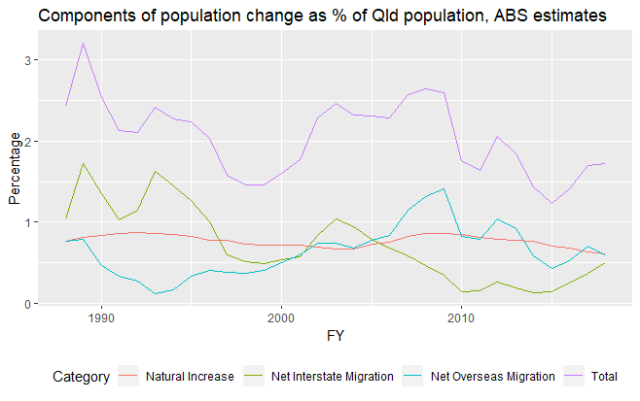 There were a few more comments and questions I received which I hope to respond to in a future post.

*This region is essentially Far North Queensland and excludes Townsville which has its own tourism region.