Qld Government gets lucky in election Budget, but debt to climb to $81 billion in 2020-21

The 2017-18 State Budget reveals the Queensland Government got very lucky this year, benefiting from a surge in royalties that has allowed it to generate a positive fiscal balance (i.e. the budget balance that also accounts for infrastructure spending) in 2016-17, and to record a genuine fall in total debt next financial year. The extraordinary budget outcome in 2016-17 was associated with huge estimated growth in nominal Gross State Product (GSP) of 11.75%, driven by higher coal prices. 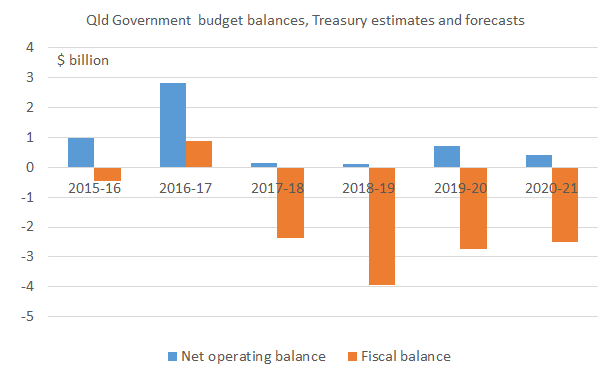 This extreme good luck is not expected to continue obviously, and the budget records fiscal deficits for the years after 2016-17. So Queensland Government debt will continue to increase, and by the end of 2020-21 debt will exceed $41 billion for the general government sector (i.e. the public service departments) and $81 billion in total, taking into account government-owned businesses such as Energy Queensland, Queensland Rail and Seqwater as well (see chart below). In the Budget, these are called public non-financial corporations.

The total debt-to-revenue ratio, which ratings agencies such as S&P and Moody’s are concerned about, will end up at 138 percent in 2020-21 compared with 143 percent in 2015-16. But this ratio needs to fall much further, to around say 110 percent, if Queensland is to regain a AAA credit rating. The Government has delivered a politically clever election budget, but is doing little to repair Queensland’s poor fiscal position.

This entry was posted in Budget, Uncategorized and tagged budget, debt, qldtreasury. Bookmark the permalink.

1 Response to Qld Government gets lucky in election Budget, but debt to climb to $81 billion in 2020-21