According to the latest National Accounts released by the ABS last week, private sector investment spending fell in Queensland over the March quarter (in seasonally adjusted terms) and State Final Demand would have fallen as well, if it were not for growth in public sector expenditure (see chart below). 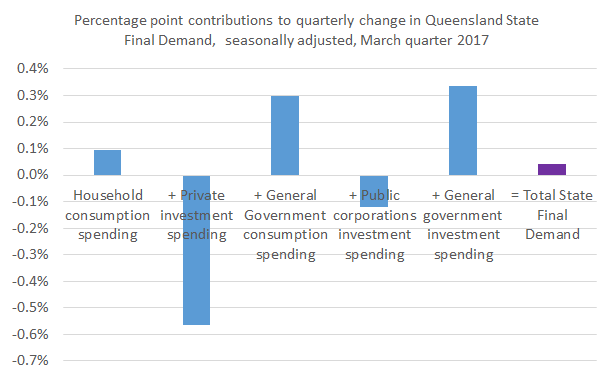 Traditionally, economic growth is associated with growing private sector investment, and the absence of a pick up in private sector investment, after it plummeted at the end of the mining investment boom, has meant Queensland’s economy has been performing below-average (see previous post). While non-dwelling construction increased in March quarter by 2.1 percent, this was more than offset by a large fall in dwelling construction of 9.4 percent. Also, business investment on machinery and equipment was 6.1 percent lower than in the previous quarter (see chart below). 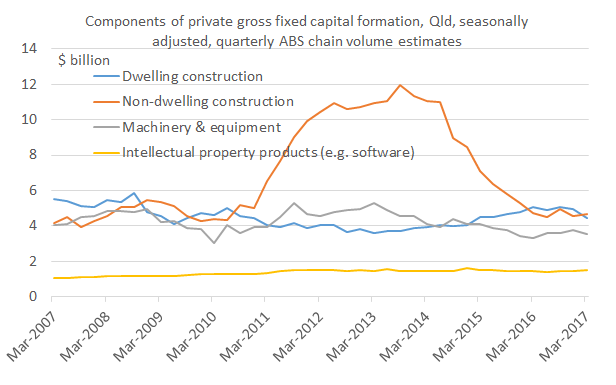 As I have noted before (see Nervous times for construction industry as downswing underway), dwelling construction is in a downswing at the moment, but the large fall in March quarter would partly be attributable to the wet weather and Cyclone Debbie at the end of March quarter.

Regarding non-dwelling construction, further growth should occur as the Queen’s Wharf project ramps up and as other projects including possibly the Adani Carmichael mine and rail line commence. But more broadly-based private sector investment is required to really push the Queensland economy along.

For Queensland Treasury’s view on the outlook for the Queensland economy, please consider attending an upcoming Economic Society of Australia (Qld) seminar: