I feel sorry for Treasurer Josh Frydenberg, who has the duty of talking up the economy regardless of what the National Accounts data are saying. As you’re no doubt aware by now, the June quarter 2019 National Accounts published by the ABS revealed the Australian economy is growing at its lowest rate since the financial crisis. Jason Murphy has a good summary at news.com.au, as does Greg Jericho at The Guardian.

Every time I hear a politician talk about strong economic fundamentals, I recall George W. Bush’s comments the US economy was structurally sound at the beginning of the downturn which became the US Great Recession of 2008.

I don’t know many of my fellow economists who would say the Australian economy’s fundamentals are strong. It’s arguably too reliant on commodities exports and government spending. That said, if the Treasurer were frank, he’d arguably worsen business and consumer confidence and contribute to the slowing economy. So he needs to say encouraging things at the risk of future embarrassment, and trust that his tax offsets and a record low cash rate boost the economy in the September quarter.

The ABS on its National Accounts Analysis page highlighted the major role played by government spending in preventing the economy from sliding further, observing:

Queensland’s domestic economy is relying on Government spending to keep our economy growing (not going into recession).

Very true, Nick. For instance, see my estimates of the contributions made by different broad components to the percentage change in State Final Demand in June quarter in Queensland. By the way, that change was approximately 0.0%. It’s possible Gross State Product growth was slightly positive, assuming exports were growing in real terms, but we don’t have those figures yet.* 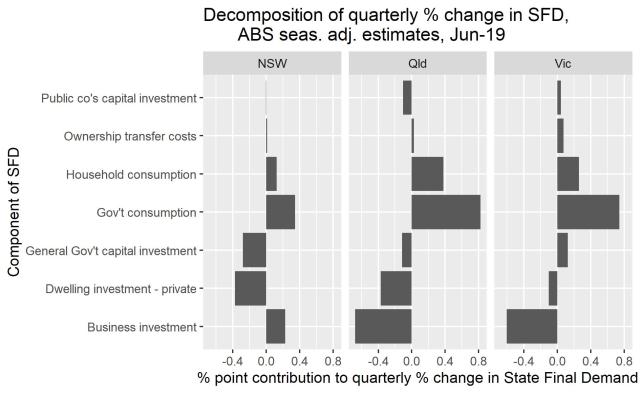 *State Final Demand measures domestic sources of demand, and does not include exports (nor are imports subtracted).