Yesterday the ABS released its latest renewable energy jobs estimates and its media release reported a Renewable energy jobs surge on the back of solar. My colleague Nick Behrens from QEAS tweeted about the new data and produced the chart below which I’ve borrowed for this post. Now I can understand the ABS’s need to write punchy headlines that capture the attention of journalists and pundits, but I’m concerned the ABS is not applying its usual level of rigour in defining jobs associated with particular sectors. The ABS is including in its broad definition of renewable jobs those jobs associated with the construction of renewable projects such as solar farms:

This is an odd definition and one which, incorrectly in my view, conflates jobs in the construction and operational phases of renewable projects. It gives a potentially misleading impression of the relative ongoing contribution to employment of the renewable energy sector. Undoubtedly there is currently a large amount of construction of renewable energy projects and that will no doubt continue in the foreseeable future, but once these projects are up and running, their contribution to employment will be much, much lower.

This development is expected to create 200 jobs during the construction stage and support 3 ongoing jobs when it is operational.

That is, the level of employment in the operational phase is 1.5% of the level in the construction phase for that particular solar farm.

Even if you include construction jobs, the aggregate level of renewable energy employment (around 5,000 full-time equivalent employees in Queensland) isn’t that large relative to other sectors. For example, Reuben Lawrence’s Economic Contribution report for the Queensland Resources Council notes there are over 35,000 FTEs directly associated with the resources sector.

In summary, I suspect renewable energy, despite whatever other merits it has, will not be a major employer of Queenslanders beyond the construction phases of renewables projects. 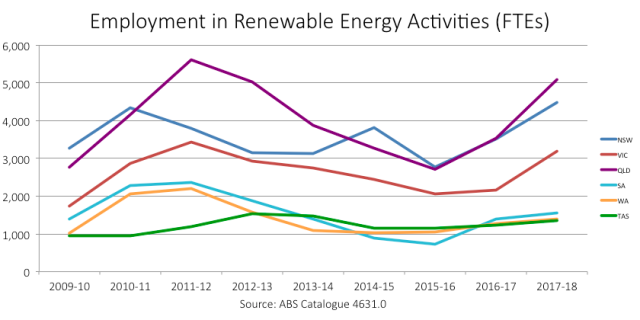