Queensland’s economic under-performance, which I’ve been commenting on regularly (e.g. see Deloitte’s weird definition of “strong employment growth”), is a major part of the reason why Australia’s GDP growth for September quarter came in lower than expected yesterday. The ABS has estimated national economic growth in September quarter at 0.3% and through-the-year growth at 2.8%, in seasonally adjusted terms. Queensland’s State Final Demand (SFD) fell by 0.4% in September quarter compared with growth of 0.3% across all states and territories (see the ABS summary). NSW’s SFD increased at the strong rate of 1.1% while Victoria registered only 0.2% growth (see chart below). 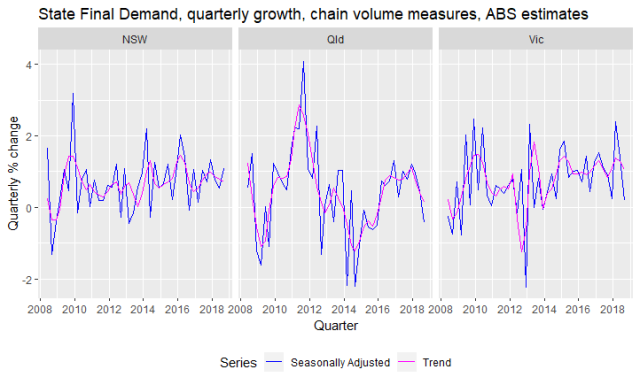 The decline in Queensland’s SFD is primarily related to declining capital investment, particularly in non-residential construction (and more precisely heavy/engineering construction), which forms a large part of business capital investment (see chart below and my post Industry groups right to say Qld economy failing to create the number of jobs needed). This of course is a volatile component of SFD and should rebound somewhat over the next few years as major projects (e.g. Queen’s Wharf, Brisbane Live, Adani Mega Mine, Cross River Rail PPP) ramp up. So I’m not panicking yet, but I would like to reiterate my suggestion that the state government urgently review the full range of regulations and legislation that could be impinging upon business activity and job creation. 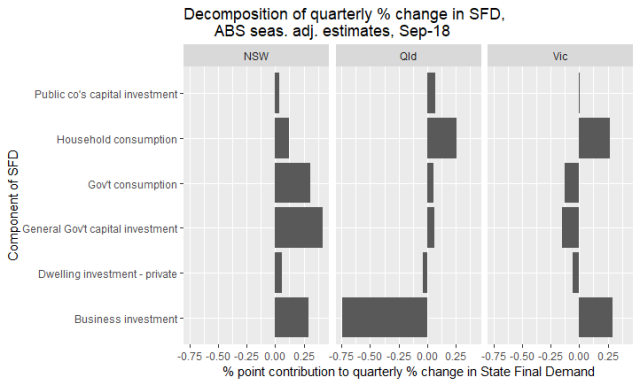