Unemployment rates in Qld and rest of Australia: breaking down the contributions of different age groups

Higher unemployment among young Queenslanders than their peers in southern states, as well as a higher proportion of 15-19 year olds in the labour force, account for a large part of the difference between Queensland’s unemployment rate, stuck at just over 6%, and the rate in the rest of Australia, which is approaching 5%.

First, consider the significantly higher unemployment rates for younger age groups in Queensland than in the rest of Australia, except for the 20-24 year old age group (see chart below, based on 12-month moving averages of ABS original data). The transition from education to work appears equally difficult for 20-24 year olds across Australia, but, for people aged 25 to 39, unemployment rates are significantly higher in Queensland. This could reflect a relatively weaker professional jobs market in Queensland than in other states in recent years. 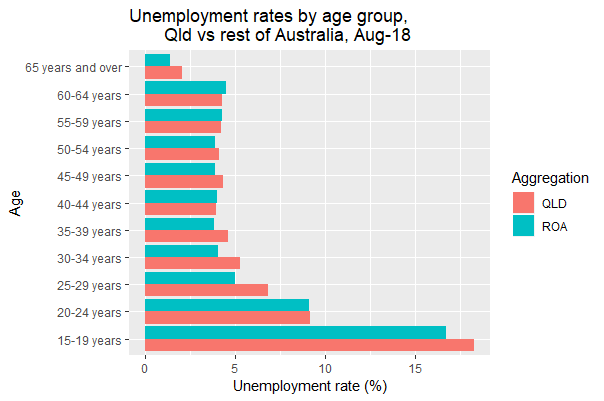 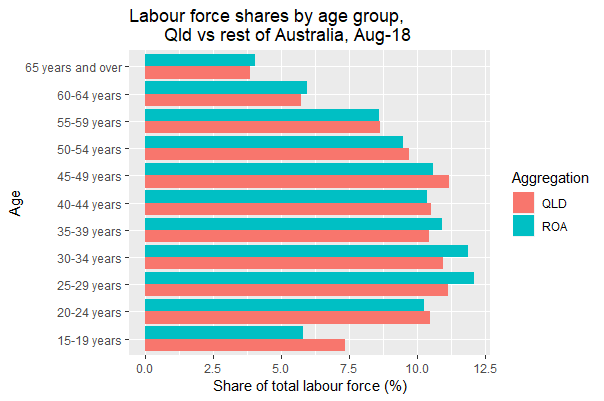 So Queensland’s higher unemployment rate is only partly explained by the state having a different age composition of its labour force, and I expect this age composition impact will decline in future years as a result of the prep year introduced in 2007 and made compulsory in 2017. Queensland’s higher-than-national-average unemployment rate is mostly related to our relative economic under-performance in recent years.

*Technical note: economists generally label the technique I’m using as shift-share analysis. The estimates in this post are based on ABS labour force data up to August. As noted above, the original (i.e. not seasonally adjusted nor trended) data published by the ABS were smoothed using a 12-month moving average. The September data will be published by the ABS on Thursday, but I don’t expect the story to change significantly.

2 Responses to Unemployment rates in Qld and rest of Australia: breaking down the contributions of different age groups