Business registrations data published by the ABS reveal Queensland has disproportionately fewer major private sector employers (with 200+ employees) than southern states. And the gap is particularly disproportionate in several sectors, including information media & telecommunications, professional, scientific & technical services, financial & insurance services, and retail & wholesale trade (see chart below). Overall, Queensland has around 610 businesses with 200+ employees, compared with over 1,500 in NSW and nearly 1,100 in Victoria. This disparity is much larger than can be explained by relative sizes of the economies: NSW’s economy is only around 75 percent larger and Victoria’s economy is only around 25 percent larger than Queensland’s. 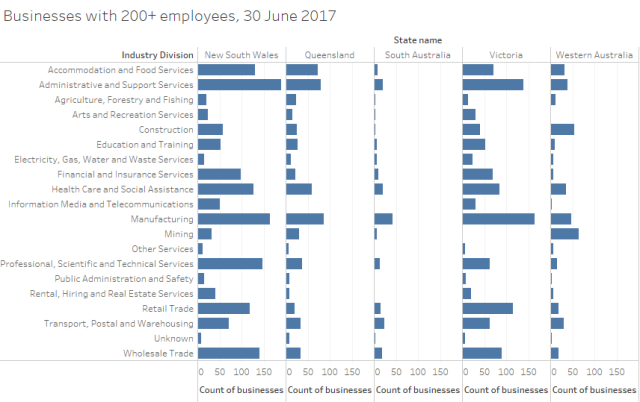 Looking more closely at some specific industry sectors (see Charts on businesses with 200+ employees for selected industries), such as professional, scientific & technical services, I am disappointed Queensland appears to be massively under-performing across a range of sub-industries, including in one consistent with the aspirations of a Smart State, computer system design & related services.

Obviously, path dependence partly explains Queensland’s relative lack of major private sector employers. Many of Australia’s largest companies were originally established in southern states and Queensland historically was much less significant in the national economy than it is today. But the figures should be concerning to Queensland Government officials, nonetheless. To me, they suggest the need to stop wasting precious resources on luring craft breweries or Hollywood movie productions to Queensland. The state government should instead focus on keeping business regulation and taxes to a minimum, improving our education and training system, and inspiring more Queenslanders to become entrepreneurs.

For other analysis of the business counts data, see Nick Behrens’s latest post:

For my views on industry policy measures to be avoided see:

Comments on BrewDog being lured to Brisbane in the Broadsheet

N.B. For clarity, the data above relate to where businesses are registered. Many large businesses registered in NSW and Victoria will have employees in Queensland, but their head offices are likely to be in Sydney and Melbourne.