Last week I forecast a continuing downswing in construction activity (Trouble in Qld construction industry & worse may be to come) and the March quarter construction data released by the ABS on Wednesday have confirmed this (see chart below), as well as a national downswing, as reported by ABC News:

So expectations of national economic growth in the March quarter have been cut significantly, and the downswing in Queensland should prompt Queensland Treasury to consider its own economic forecasts leading into the Budget. While I still expect the Queensland economy to grow over the rest of 2017, due to strong tourism, international education and export sectors, the construction downswing will certainly lower the growth rate.

On the same day the new construction data were released, we learned that another Brisbane builder has failed in tough market conditions:

In Queensland, the downswing in the building construction sector was offset partially by what may be the start of a recovery in engineering construction (see chart below). 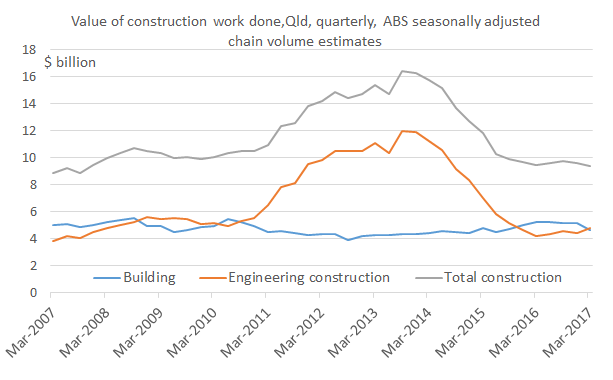 As one of my regular readers Glen noted in a comment last week, this suggests it may not be a good time to introduce the new Project Bank Accounts (see this media release) which are of great concern to industry peak bodies. Glen commented:

…what is of most concern is the proposed sub-contractor legislation. Whilst the legislation is required its timing couldn’t be worse, the industry just isn’t prepared. Many currently don’t have the cash flow to be able to comply with the new laws and rely on revolving credit to contractors and suppliers to survive. Many suppliers to the industry that I talk to have already acknowledged they will be last on the list now as sub-contractors will be paid before suppliers. Accordingly many suppliers have begun to enforce their credit conditions more rigorously. It is all starting to point to a nasty conclusion.

An ominous forecast from an informed source. I will continue to keep a close watch on the industry.

This entry was posted in Housing, Uncategorized and tagged building, construction, qld, queensland. Bookmark the permalink.