Based on its discussion paper for its five year productivity review, the Productivity Commission appears to be suffering from ennui or world weariness. Consider this passage, which the PC has published in bold italics (on p. 17):

“The Commission is particularly interested in new and novel ideas because there is already a strong awareness of many reform options that parties would like to see implemented. More of the same is not likely to be helpful.”

The PC obviously does not want to hear from economists or business groups regarding the need for reforms to the labour market or the tax system, as it has heard it all before; and it has argued for such reforms itself and has been ignored by the Government. Indeed, just last week, PC Chairman Peter Harris expressed his frustration at the Government’s lack of response to the PC’s workplace relations review, which recommended changes to penalty rates and the breaking up of the Fair Work Commission, among other things. In a speech in Melbourne, the PC Chairman commented:

“It is almost twelve months since the Productivity Commission completed its Inquiry Report into Workplace Relations.

The Government has yet to formally respond and given the nature of the topic, that is probably understandable.

We can all hope that the time is being spent wisely.”

The sarcasm in the last sentence is obvious. Rightly, the PC does not have high expectations of the current Government on workplace relations. The Government has only committed to responding to the PC’s report “in due course”, and most likely not this year (see this AFR report).

Alas, I think the PC may have learned the wrong lesson. In showing interest only in “new and novel ideas”, it appears to have given up prosecuting the case for reforms to the labour market and tax system, for example. But the PC is very well resourced with high calibre economists and should be redoubling its efforts to make the case for reforms.

If the PC is uninterested in re-litigating the case for workplace relations and other policy reforms, it could perhaps focus on advocating for minimal regulation of new technologies—e.g. driverless cars, drones, robots, and collaborative economy platforms such as Uber and Airbnb. Incidentally, I have spent the last week and a half in Indonesia, which has one of the best collaborative economy apps I have seen, GO-JEK. Check out all the wonderful options in the screen shot below, including Go-Ride, Go-Food and even Go-Massage. 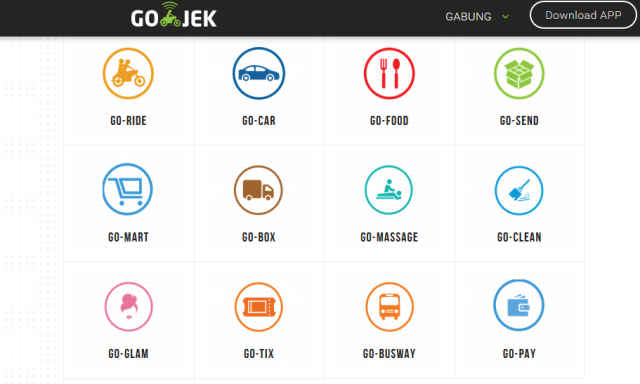 New technologies such as those mentioned will boost our living standards, and they may soon enough solve the current productivity malaise, by eliminating the need for humans for many work tasks. However, it is most likely the process of substitution will occur in fits and starts over several decades, and the labour market will have time to adjust. I expect much of the displaced labour will be absorbed by the services sector, particularly in recreational, health, disability and aged and child care jobs.

In addition to promoting minimal regulation of new technologies, the PC should also push strongly for open data, whereby as much government data is made publicly available as possible, as this data can inform business decisions and be used to create useful apps. Publicly available spatial and topographical datasets have been found to add significant value to the economy. In 2008, ACIL Tasman estimated that the spatial information industry, which is reliant upon publicly available data sets, contributed around $700 million to the Australian economy (see the Lateral Economics report Open for Business, p. 20).

However, as the PC finds in its recent draft report on Data Availability and Use (on p. 25):

“Australia’s provision of open access to data is below comparable countries with similar governance structures — including the United States and the United Kingdom. There remains considerable scope to improve the range of datasets published (and, correspondingly, the diversity of agencies and research bodies publicly releasing data) and the usability of open data portals.”

The PC has referred to its data availability and use project in its productivity discussion paper, and I trust it will further promote its findings in the interests of better utilising our publicly funded data sets and improving productivity.

Finally, I should note I have refrained from commenting on the US election because I have always expected a business-as-usual scenario in which Hillary Clinton takes over from President Obama and follows largely similar policies. Of course, one point of difference between Clinton and Obama is the Trans-Pacific Partnership, but it is unclear whether the President will be able to get this ratified by the Congress before Clinton takes power.