Queensland actually turned out to be the reason the ABS had to fudge the data. The ABS notes on its website:

“The incoming rotation group in Queensland for September 2016 was considerably different to the rest of the Queensland sample and its influence has been temporarily reduced as part of the estimation process. The data will be further reviewed when October data are available.”

Annette Beacher from TD Securities went as far to say that the latest ABS data are “rubbish” (see this ABC News report), and I pretty much agree with her, as I mentioned to ABC Radio’s Loretta Ryan on the Regional Drive program yesterday afternoon. The information content of yesterday’s labour force data is very low. I am always careful not to read too much into any one month’s figures due to the volatility in month-to-month changes, but yesterday’s data were even more dubious than data in the past. Considering both the unreliability of the labour force data, which are essential to monetary policy formulation by the RBA, and the recent Census debacle, the Government may need to bring in new senior management and boost the budget of a clearly struggling ABS.

Finally, Queensland’s unemployment rate fell from 6.2% to 6.0% in seasonally adjusted terms (see chart below), which I would like to believe but am unsure of due to the unreliability of the data. That said, I told Loretta Ryan there are reasons to be confident Queensland’s economic conditions are improving, especially considering positive developments in mining, tourism, and agriculture. 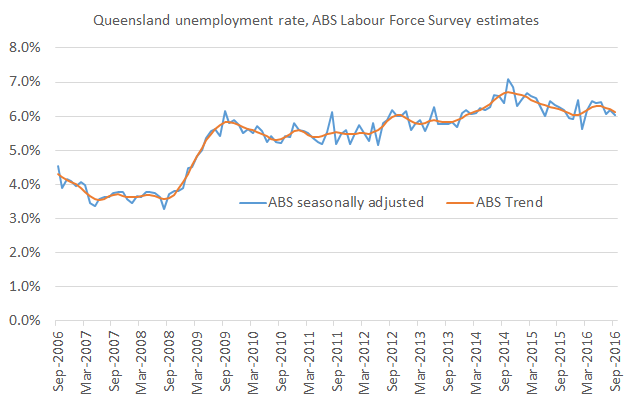