Today I am delighted to publish a guest post from my NSW-based friend and fellow economist Alistair Robson.

Why are NSW mining regions enduring the mining downturn better than Qld regions?

Despite the Sydney-centric focus on the New South Wales economy, a hidden gem has been the regional labour market. Employment grew by 4.4% over the year to April 2016 outside of Greater Sydney compared with 3.0% within the Greater Sydney area. This growth comes despite the housing construction boom underway in Greater Sydney and drought like conditions in some parts of regional NSW.

Employment growth – % over the year 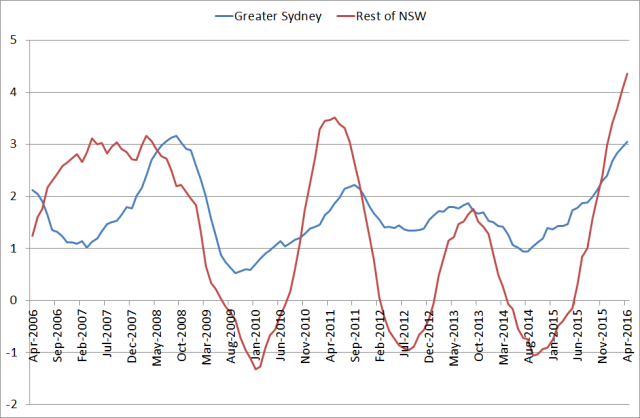 The Richmond-Tweed region bordering South East Queensland performed the best with a stellar 15.0% employment growth rate, followed by the Southern Highlands and Shoalhaven region at 9.5% and the Hunter Valley (excluding Newcastle) at 9.0%.

Comparatively, regional Queensland employment (ex. Brisbane-Gold Coast-Sunshine Coast) has been falling for over 2 years.  There is now a very large gap in regional employment growth between the two states. 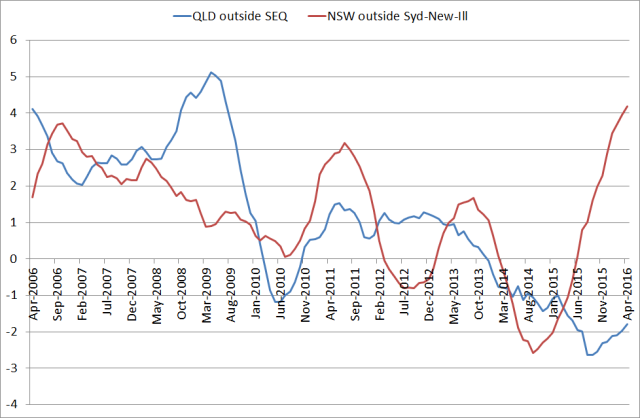 Considering the impact of lower coal prices on many Queensland regions it appears remarkable employment growth has been so high in the Hunter region. Proximity to Newcastle and Sydney may have helped the region’s labour market adjust, a benefit which Queensland regions such as Mackay do not have.

Despite strong regional employment growth some areas in NSW experienced falling employment, such as the Far West and Orana, the Murray and Riverina regions. The impact of the drought like conditions may have been detrimental to the labour market in those regions as they have in some regional Queensland regions.

Within the Greater Sydney area employment growth was greatest in the Central Coast region at 12.9% and the South West region of Sydney at 11.4%. 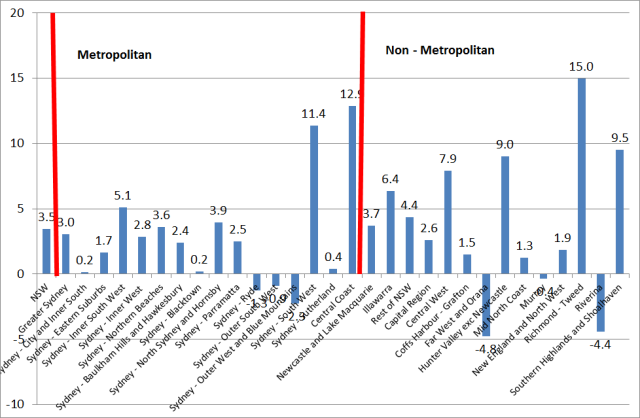 Dr Alistair Robson is an independent economist based on the Central Coast of New South Wales. He holds a PhD in economics from the University of Queensland.