The Australian Government is right to be looking at reforming the rules around negative gearing, as the current rules appear to be distorting the market and encouraging excessive borrowing for investment properties (as well as denying the Government significant amounts of tax revenue). Negative gearing as a principle is fine, and is essential for the consistent treatment of debt and equity finance, but the highly concessional treatment of capital gains means that negative gearing strategies are very attractive to property investors. In its Re:think tax discussion paper from last year, the Treasury gives an excellent summary of the issues (Box 4.2):

“A property is said to be negatively geared when the mortgage interest repayments exceed the net income from the property (rental income minus other deductible expenses such as property agent fees, insurance, gardening, land tax and depreciation). In these circumstances the taxpayer can apply this ‘loss’ against their other income, such as salary and wages. This strategy is only financially effective where the taxpayer expects a future capital gain more than offsetting this ‘loss’. Generally only 50 per cent of that capital gain is subject to tax upon realisation, which the Financial System Inquiry’s final report noted could encourage ‘leveraged and speculative investment’ in housing.

So, ideally, the capital gains tax discount of 50%—which is arguably too concessional in Australia’s low inflationary economy—should be lowered, as it is distorting the market.  There is certainly a distortion to correct, a distortion which is demonstrated by two odd facts.

First, the majority of investors in rental properties are declaring net losses on their properties to the ATO (see chart below based on ATO tax data). 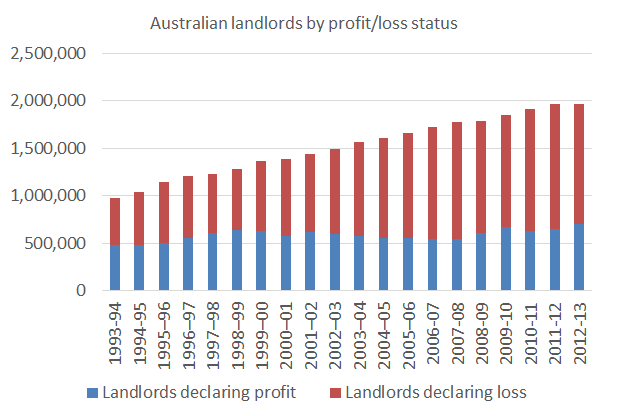 Second, as noted in Treasury’s tax discussion paper (p.64), “deductions claimed for investment properties as a proportion of gross rental income have increased over the last 15 years and are now greater than gross rental income.” So Australian households, in aggregate, are declaring a net loss on their rental properties, excluding capital gains (see chart below). That is, they are relying solely on capital gains to make money on their investment properties. This seems like a very odd situation, driven by the highly concessional tax treatment of capital gains that was introduced in 1999, and arguably should be addressed by the Government in its upcoming tax reforms.