Trend is the Treasurer’s friend

That is correct based on the so-called trend estimates, which are derived by applying a statistical filter to the seasonally adjusted GSP series to smooth it out. An important consideration is that smoothing procedures are much less accurate for the most recent values of time series, because the future data points that would help determine the direction of the trend have not yet been observed. Hence trend estimates can mask turning points in time series (e.g. when an economy enters a downturn) because they give too much weight to past observations. 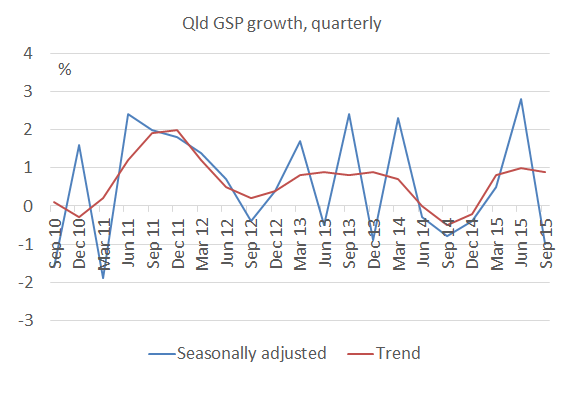 To some extent, this GSP decline in September quarter could reflect statistical noise, but the decline should caution anyone against placing too optimistic an interpretation on the recent GSP data from Queensland Treasury. The seasonally adjusted data suggest the Queensland economy is being adversely impacted by declines in both private and public sector investment spending.