The election debate would benefit from a clear understanding of the factors affecting interest rates, now that the RBA has increased the cash rate from the “emergency level” of 0.1%, practically the lowest it could go, to the still extraordinarily low 0.35%. First, both actions of the RBA and the government are relevant, although the RBA is the most important actor, as it is responsible for monetary policy, which is the main policy instrument for targeting inflation and keeping it in the 2-3% range, which it has now exceeded (see chart below). Second, both domestic and international factors are relevant, with the exchange rate playing an important role in the impact of domestic monetary policy.

Inflation is a monetary phenomenon, and, ultimately, what the RBA is doing through manipulating the overnight cash rate is affecting the stock (or supply) of money in the Australian economy. The link between money supply growth and inflation may not be strong in the short-run, but is strong in the long-run, an important lesson from Milton Friedman.

Associated with the accelerating inflation we are now experiencing is the large growth we have seen in the money supply, due both to quantitative easing and the housing credit boom (see chart below). Australian households and businesses have a greater stock of money in their bank accounts (M3 has expanded 20% since March 2020), boosting their real money balances, to use the jargon, and prices have to catch up. There has been too much money chasing too few goods, as Friedman would have described it. Interest rates need to rise to reduce housing credit and money supply growth. Arguably, RBA monetary policy was too aggressive during the pandemic, sparking the housing credit boom and crazy increases in property prices across Australia.

This is not to say the government is irrelevant. Its fiscal policy stance can certainly contribute to inflationary pressures, through its influence on aggregate demand, which can contribute to the economy overheating, so to speak. The federal budget stance is probably too expansionary given robust economic conditions – i.e. given the robust recovery, the federal government shouldn’t be planning a “cash splash” and expecting to run a $78 billion deficit in 2022-23 (see the 2022-23 Budget). The deficit should be much less, as suggested by the size of the estimated structural deficit (plus temporary measures), which appears to be a bit over 5% of GDP in the current financial year (i.e. over $100 billion) and 4-4.5% of GDP in 2022-23 (see Chart 3.15 on p. 105 of Budget Paper 1).

That said, the federal opposition won’t tighten fiscal policy if it wins the election, so it can’t criticise the government over this. Indeed, it’s being reported the federal opposition will increase budget deficits, although the Australian’s reporting of Labor turbocharging budget deficits appears a bit over the top if they’re talking about $10 billion over four years, which is a fraction of currently projected deficits. The federal opposition is claiming it will relieve inflationary pressures through improving the supply-side of the economy, through investing in education and improving child care support. Such measures may have some small salutary effects but would take time and wouldn’t address the fundamental problem that inflation is accelerating, inflation expectations are rising (see chart below), and there is no alternative but to increase rates. We don’t want to end up with inflationary expectations guaranteeing future inflation through wage and contract bargaining. If that occurs, the RBA may need to increase interest rates to punishing levels to get inflation back into the 2-3% range. Where interest rates will end up is anyone’s guess, but a 2 to 3 percentage point increase seems plausible at this point.

Given the well known long and variable lags in monetary policy (see Assistant Governor Luci Ellis’s 2018 speech On Lags), the RBA probably should have acted earlier. There is a chance they acted too late, possibly because they were so adamant for so long they wouldn’t raise the cash rate until 2024 and they delayed until the last possible moment. Dennis Atkins at In Queensland and Steve Kates at New Catallaxy have written great articles criticising RBA decision making.

Certainly, other central banks, particularly New Zealand’s, have acted earlier and more aggressively than the RBA (see chart below), and the RBA may have made its biggest monetary policy blunder since the overly-restrictive monetary policy prior to the early-nineties recession – this time in the other direction. Now, the US Fed has shocked financial markets with its recent 0.5% policy rate hike, and there’s speculation of a coming US recession, so, as always, the future remains uncertain, and forecasting macroeconomic variables can make economists look foolish.

It’s probably impossible to fully untangle domestic and international factors in influencing inflation and interest rates, because we’re so integrated into the global economy, but let’s think about the linkages.

First, there is the correlation of economic activity across countries, transmitted via international trade, real interest rates and borrowing costs globally, or via common shocks (e.g. the pandemic). Major economies are rebounding from the pandemic recession and, hence, interest rates are rising at the same time across economies.

Second, there is the fact that our real (i.e. inflation adjusted) interest rates can’t deviate too far from those in other countries because that will affect capital flows (i.e. if our real interest rate is lower, fewer foreign investors would buy Australian bonds) and this will affect the exchange rate. So if major economies are tightening their monetary policies, and their real interest rates are increasing, and, if we don’t do the same, then we become a less attractive destination to invest in and we experience a real currency depreciation. While good for exporters, this is bad for consumers and would contribute to domestic inflation through higher import prices (and through its impacts on exports it could contribute to over-heating). This means the RBA faces a difficult balancing act. It may not want to increase interest rates as aggressively as other central banks, for fear of slowing the economy too much or crashing house prices, but this would mean a depreciating currency and imported inflation.

The outlook from here

I expect we’ll have to endure an extended period of much higher inflation than we expected, but output and employment outcomes should remain strong for the next year or so at least. Among other positive contributors, the Queensland economy and state budget are getting a substantial boost from the super-high coal prices we’ve seen (see chart below, noting the ICE Newcastle coal price is for thermal coal).

This is going to mean billions of extra dollars for the Queensland budget. The state government should use this windfall to reduce its borrowings so it can limit the impact of rising interest rates (see chart below), which will lift its debt servicing costs (the interest expenses line item in the budget) in coming years.

Finally, on the robust economic recovery, John McCarthy has a good report at In Queensland covering the latest retail trade data: Perfect swarm: Consumers head back to the shops as investors target Queensland. People are certainly out-and-about more in Queensland than in southern states, as you can see from Google mobility data (see chart below). There is a big drop in the penultimate data point for Queensland in this chart which is related to the Labour day holiday. Incidentally, even on the days when other states have a public holiday, Queensland mobility is lower on those days, too, probably because of our more restrictive retailing trading regulations. 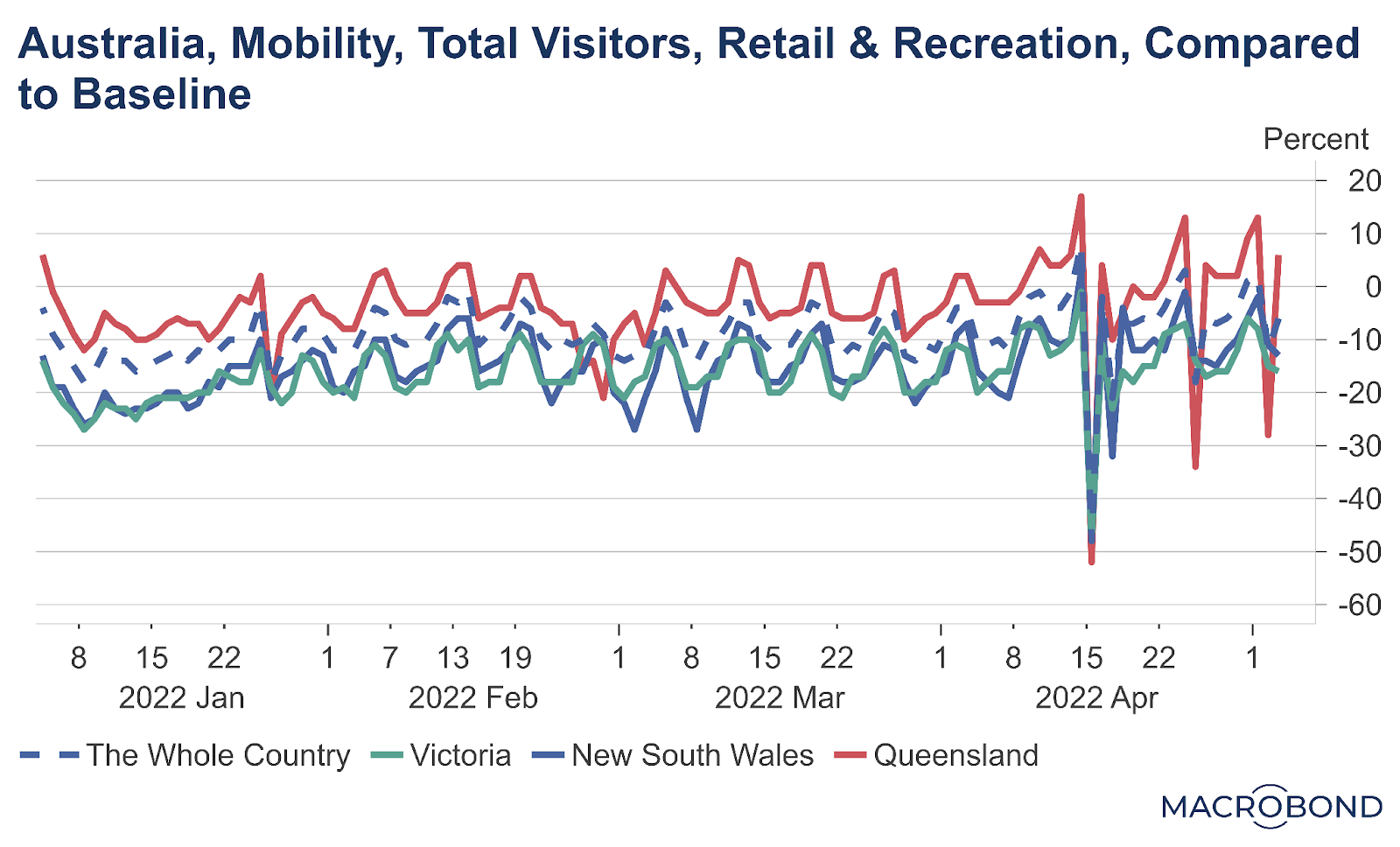 Please feel free to comment below. Alternatively, you can email comments, questions, suggestions, or hot tips to contact@queenslandeconomywatch.com. Also please check out my Economics Explored podcast, which has a new episode each week.