Upcoming QMCA breakfast presentation on the Qld economic outlook for 2019

On Friday 8 February, I will present on Queensland’s economic outlook at the Queensland Major Contractors Association’s first breakfast event for 2019. With all the uncertainty in the global economy, it’s been a very interesting holiday period, and I’ll include some reflections in my presentation on the risks of a global recession in the next two years, the US-China trade war, and Brexit.*

However, we need to recognise the figures would have been boosted somewhat by the Commonwealth Games. Furthermore, while the figures were very welcome, the Queensland economy is much more than tourism and we need broader growth to provide sufficient jobs for our growing population. Pleasingly, job vacancy figures for November published by the ABS last week showed continuing growth in vacancies (see plots below). 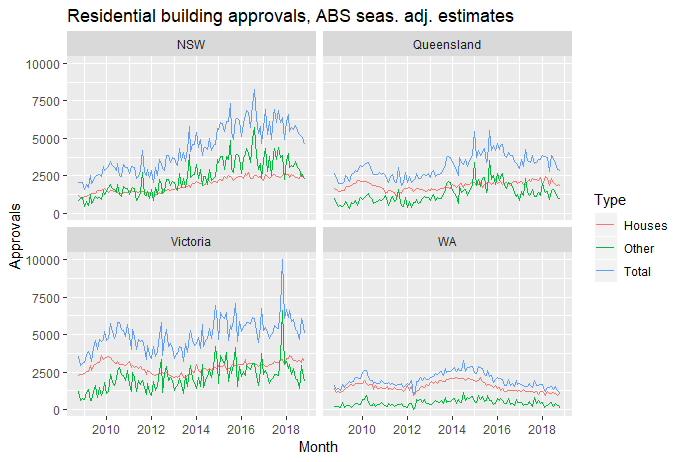 Alas, there doesn’t appear to be a resurgence in non-residential building approvals that would offset declining residential approvals (see plots below). Note these plots don’t include heavy engineering or civil construction, but the relevant data, which I’ll review in a future post, don’t give us any grounds for enthusiasm either. We’ll get the new data on the pipeline of work when the ABS releases its September quarter 2018 engineering construction data this Wednesday.

No doubt partly related to our strong tourism growth, retail trade in Queensland has picked up strongly and appears much healthier than in NSW, where it would have been affected by falling house prices, as I expect there has been a drop in discretionary purchases that were previously funded by capital gains (see plots below).

Mining is another sector important to Queensland’s economy, as emphasised in a recent informative post by CCIQ Chief Economist Marcus Smith:

Mining has helped push Queensland’s total annual merchandise exports to over $80 billion, up around $9 billion or 12% over the year. Coal exports increased nearly 11% or $3.4 billion to $35.4 billion. For these statistics, see Queensland Treasury’s handy briefing note. Mining is currently on an upswing in Queensland so I expect continued volume growth over 2019, although expected coal price declines this year may hit export values and revenues (e.g. see Coal forecast to drop off in 2019 as demand softens).

Finally, health and social services should continue to add to labour demand and GSP due to both the NDIS and demographic change. Indeed, the federal government appears to view the NDIS partly as a job creation scheme, based on its introduction to an NDIS-related grants program, the Jobs and Market Fund:

The National Disability Insurance Scheme (NDIS) is a significant social and economic policy reform representing one of the largest job creation opportunities in Australia. Achieving choice and control for participants requires a well-functioning market of NDIS providers, from which empowered NDIS participants are able to choose quality services that meet their needs. To support this vision, the NDIS workforce needs to grow by approximately 90,000 full-time equivalent workers to support 460,000 participants at full scheme.

The Australian welfare state appears to have bi-partisan support. Hence there is little likelihood our government will retreat to 30% of GDP, as advocated by the Centre for Independent Studies and which a recent study by Tony Makin and Julian Pearce suggests may be desirable from the perspective of maximising economic growth (as I noted in a CIS Ideas piece mid last year).

Overall, there are mixed signals regarding Queensland’s economic outlook over 2019. My sense at this stage is we won’t have either a boom or a downturn, but rather a continuation of the moderate economic conditions we have seen in recent years, as strong and weak sectors balance each other out. Indeed, Queensland Treasury has forecast a continuation of moderate economic growth, at 3% in 2018-19 and 2.75% in 2019-20, in its Mid Year Fiscal and Economic Review.

For a more expansive review of Queensland’s economic outlook for 2019, please consider attending my QMCA breakfast presentation on 8 February.

* We’ll learn more about the likelihood of  Brexit this week when the House of Commons votes on the current Brexit deal. It’s very possible that MPs will vote against PM May’s deal, and the government is then forced to rescind the current Brexit scheduled to occur on 29 March, as the horrifying reality of what a no deal Brexit would mean becomes increasingly apparent.