Last Wednesday, RBA Deputy Governor Guy Debelle addressed the ESA (Qld) business lunch at the Brisbane Hilton on the topic of low inflation.* The Deputy Governor took the audience through the different components of the consumer price index (CPI) and showed the large contributions that increases in cigarette and energy prices have made to inflation in recent years, and also that these increases have been offset by declines in many retail prices due to greater competition and technological improvements, keeping inflation low overall.

While Debelle’s speech was highly informative, it was something he only briefly mentioned, and which was not actually in his official speech, that interested me the most: the debate about whether house prices should be included in the CPI. Debelle noted that housing costs are reflected in the CPI in two ways: new dwelling construction costs and rents. He said that house prices themselves are not included, but why that is so could form the topic of another speech. For economists already familiar with the CPI data, that may well have been a more interesting speech, as it would have prompted a discussion of the appropriateness of the RBA’s current methodology for setting monetary policy.

Recall that the RBA sets the overnight cash rate, which influences longer-term interest rates, with a view to targeting 2-3% CPI inflation over the business cycle. It is important, therefore, that measured CPI inflation provides as accurate a gauge of underlying inflation as possible, otherwise monetary policy could be too loose or too tight, destabilising the economy.

As house prices are not included in the CPI, the RBA may not adequately consider them in its formulation of monetary policy. The RBA could set monetary policy too loose, with a low cash rate, encouraging a housing boom with high house price inflation, even though rents may be increasing at a much lower rate. But, as it is rents that are included in the CPI not house prices, the RBA may miss the signal that its monetary policy is too loose. This is arguably what has happened in Australia since 2012-13 (see chart 1). In his latest column in the AFR Weekend, leading financial economist and investor Christopher Joye made the excellent observation:

…the RBA had recklessly underestimated the impact of its 2012 and 2013 rate cuts on house price growth and credit creation, which would precipitate a bubble and the need for unprecedented regulatory constraints on lending…

Those regulatory constraints by APRA have worked, and Sydney and Melbourne house prices are now falling, after having reached absurd levels. Hopefully the adjustment will be relatively smooth without an adverse impact on the broader economy. Of course, that is not guaranteed. Consider the related risk to the economy from the reset of a large number of interest-only loans for investment properties to traditional principal-and-interest loans over the coming years. This reset could lead to cash flow problems for many investors and forced sales of properties, putting further downward pressure on prices and possibly curtailing household consumption expenditure, with macroeconomic consequences (e.g. see this AFR article from April).

In my view, the RBA has patted itself on the back too much regarding the success of its inflation targeting regime, and it should consider alternative approaches, such as nominal GDP targeting or an approach which augments inflation targeting with a mandate to promote financial stability, as discussed by Warwick McKibbin and Augustus Panton in an RBA conference paper from April:

25 years of inflation targeting in Australia: Are there better alternatives for the next 25 years?

Finally, I should note it’s probably unnecessary to include house prices in the CPI, although the RBA should pay greater attention to house prices than it has historically. Statistical agencies such as the ABS arguably have valid grounds for excluding house prices from the CPI. For instance, houses are an investment, rather than a typical consumption good, and the CPI is intended to measure consumer prices. The larger issue is the appropriate monetary policy framework, particularly the extent to which central banks take into account credit conditions and asset prices in their monetary policy decisions. By focusing excessively on CPI inflation, which the CPI inflation target of 2-3% prompts the RBA to do, the RBA arguably failed to restrain the excessive growth in house prices we saw in recent years. Over the next few years, we will see whether that misjudgment will have adverse macroeconomic consequences. 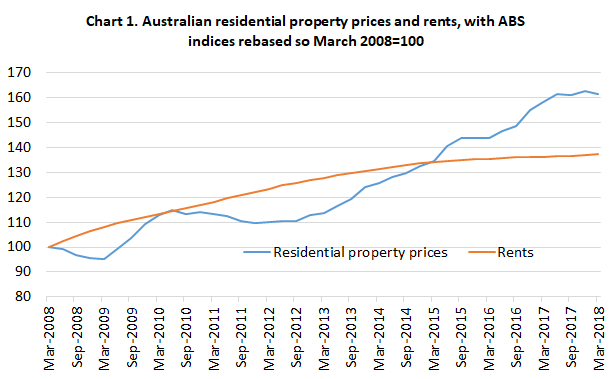 * I am a Vice President of ESA (Qld), but this post contains my personal views, which should not necessarily be attributed to the society.