Exports to bolster Qld economy in difficult year ahead 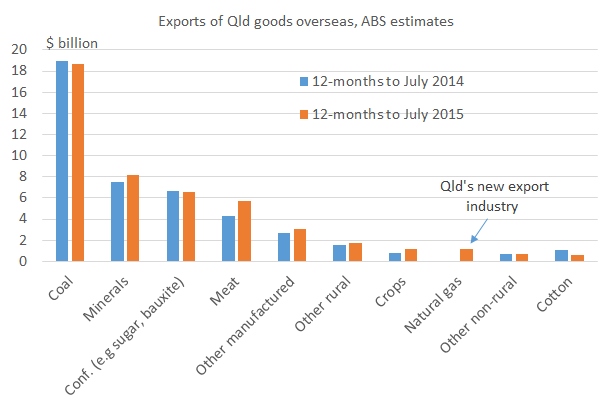 Queensland Treasurer Curtis Pitt is doing his best to talk up the Queensland economy, noting in recent media releases that Queensland exports are soaring and that Deloitte is forecasting 4.5 per cent economic growth in Queensland in 2015-16 and 4 per cent in 2016-17.  The strong exports growth (nearly 7 per cent in the 12 months to July) was due largely to very strong growth in meat exports (32 per cent over the twelve months) and the emergence of the new LNG export industry at Curtis Island off Gladstone (see chart above).  LNG is expected to provide a huge boost to exports over 2015-16 and 2016-17 as LNG production capacity progressively comes online. LNG could add an extra $5 billion to $7 billion  (around 2 per cent of Gross State Product) to exports in each financial year, as LNG exports ramp up to a projected $15 billion in 2016-17, which means Deloitte’s growth forecasts are not implausible. A boost to exports is much needed, as it is very possible that private sector capital expenditure will continue to fall over 2015-16.

In other positive news, the number of international visitors to Australia is growing very strongly, according to recent ABS data reported by Pete Faulkner: