There was good news for the Queensland economy yesterday, with the ABS reporting a continuation of the rebound in private sector job vacancies in the final quarter of last year (see chart below). Private sector job vacancies have increased from a low of 19,900 in May to 30,500 in November 2016, bringing total vacancies to 33,600. Partly the strong performance in November would have been seasonal. As the Acting Treasurer Bill Byrne noted in a media release yesterday regarding the increase in vacancies:

“A significant proportion of this will be seasonal work in retail and also on farms with crops ripe for picking.”

I also suspect the strong performance of the Queensland tourism sector, largely related to the lower Australian dollar, made a major contribution to the private sector recovery in job vacancies over the second half of 2016. 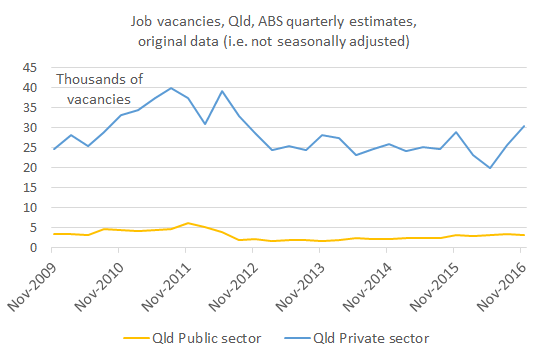 Queensland’s recovery in job vacancies stands in contrast to the performance of other States, in which vacancies were more-or-less stable (e.g. see chart comparing Queensland, NSW and Victoria below).