My comments in Brisbane Times on Qld Government regional CAPEX

Brisbane Times journalist Tony Moore has written an interesting piece based on a QEW post of mine from June on the regional distribution of Queensland Government capital spending in the 2017-18 Queensland State Budget:

The article includes quotes from my June QEW post and some quick comments I made over the phone to Tony on Wednesday afternoon:

Mr Tunny said he believed the Queensland government was nervous of the regions and needed to win seats in in those regions to hold office.

“What I make of the figures is that the government is certainly overly conscious of feelings in the regions that they are being ripped off by George Street and over the past couple of years that is blatantly incorrect,” he said.

“However I think, on the basis of the figures I have seen, there are regions in the south-east corner that are being under-funded and I don’t think that is fair.

“There are the fast-growing areas that are not getting the funding that they need.” 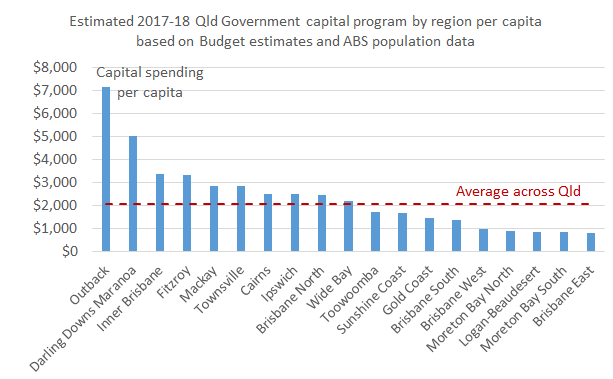 This entry was posted in Budget, Uncategorized and tagged brisbanetimes, capex, qld, regions. Bookmark the permalink.