Regular readers will know that I have been a bit skeptical about the State Government’s overly optimistic statements regarding the Queensland economy (e.g. see yesterday’s post). The economy has certainly been resilient at the end of the mining boom, but it is still relatively weak. This was confirmed today by the new ABS Labour Force Survey data for January, which show an increase in the seasonally adjusted Queensland unemployment rate from 5.9 per cent in December to 6.4 per cent in January (see chart below). Nationally, the unemployment rate increased from 5.8 per cent to 6.0 per cent. 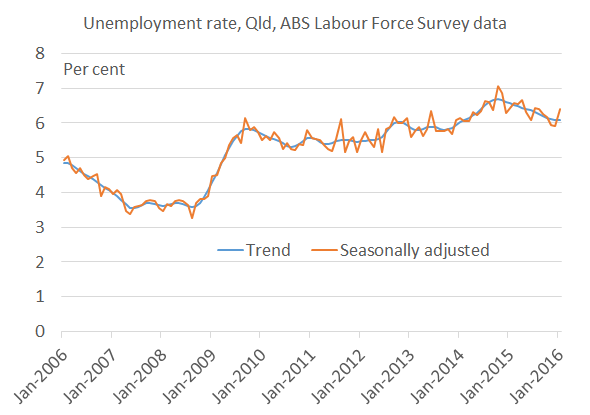 Alas, the weak economic conditions in Queensland are likely to persist over 2016. As I noted yesterday, both private and public sector investment spending have fallen in recent quarters. And I know that the shortage of major infrastructure projects has many in the business community concerned. 2016 is going to be a lean year.