Australia’s boldest experiment and the first age of the econocrat 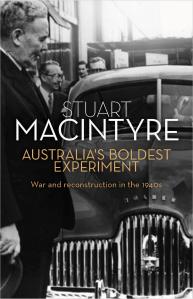 In the early 1990s, there was an article in the Weekend Australian on “The age of the econocrat,” which described the huge influence that economists in Canberra had on policy making at the time. It was an article which partly inspired my eventual career path. This of course was in those heady days of micro-economic reform. But there was an earlier age of the econocrat (i.e. the economic bureaucrat) in Australia, in the years of war and post-war reconstruction, in which one of the leading roles was played by the Director of Post-War Reconstruction, arguably the greatest of all econocrats, HC “Nugget” Coombs. Stuart Macintyre’s brilliant history of this period, Australia’s Boldest Experiment, published earlier this year, takes us back to those extraordinary times.

The book illuminates the important roles played by economists such as Coombs and Trevor Swan in post-war reconstruction, particularly in the largely successful demobilisation of troops after the war and the transition out of the war-time economy. But the book is no hagiography, and it draws attention to Coombs’s failure to repurpose his Department of Post-War Reconstruction into a ministry of economic planning that would provide a counterbalance to the laissez-faire prescriptions of the Treasury. As a former Treasury man, I am thankful that Coombs lost that battle.

It was also fascinating to read in the book about the extraordinary influence on decision makers, including on then PM Ben Chifley, that one of the all-time great Canberra mandarins, Treasury’s Frederick Wheeler, had from such a young age. Wheeler would later head the Treasury in the 1970s and would become well known for his opposition to the Whitlam Government’s unorthodox financing methods.

Something else I really liked about the book was its critical analysis of the merits of the Snowy Mountains hydroelectric scheme, that grand post-war nation building scheme which certainly helped transform the country, but which most likely did not stack up economically. As Macintyre notes (p. 423):

…even before the scheme was completed, there were claims that it did not add to the nation’s wealth but detracted from it. A critic argued in 1963 that thermal stations were a cheaper source of electricity and six years later the agricultural economist Bruce Davidson calculated that the private returns from additional farm production did not cover the public cost of providing the water.

So the Snowy Mountains scheme should provide a warning to anyone with grand schemes in their mind.

Macintyre’s book is highly recommended to anyone with an interest in Australian history or economy policy. I expect it would be of great interest to many of my former Canberra colleagues, who may marvel at the influence and achievements of the econocrats of the forties.