Australian Perspective: 2016 and beyond – keynote presentation to CPA Congress, Brisbane

Australian Perspective: 2016 and beyond

In the presentation, I emphasised the Australian economy is facing some strong headwinds. The outlook for business investment is discouraging, and there are real concerns about the Chinese economy and a risk it could experience a major downturn, which would obviously have ramifications for our economy. I discussed how I am also concerned about the housing market, given it is pretty clear the Sydney market at least has over-heated. So the recent Macquarie Bank report predicting a 7.5 per cent slump in house prices should not be quickly dismissed. Certainly, The Economist  magazine has argued Australian house prices are over-valued for what must be more than a decade now, and I was glad a recent issue contained its latest estimates of the extent of over-valuation, estimates which I used in the presentation this morning (see chart below). 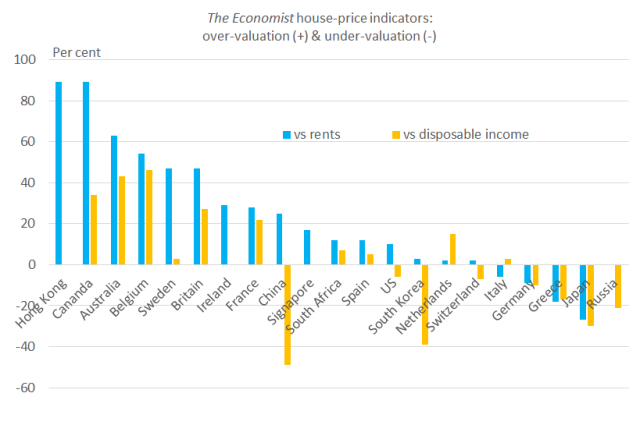 I also discussed the urgency of the budget repair and economic reform tasks for Australia, given the risk we will enter our next downturn still with a large fiscal deficit, reducing our fiscal room to manoeuvre, and also due to the challenges posed by population ageing and our ever-growing social security and welfare expenditures. I suggested the Government might consider changes to current superannuation tax concessions, so they are less generous to high income earners, and that changes to these concessions would be much less politically toxic than, say, changes to the aged pension (e.g. including the family home in the assets test) or negative gearing rules. The Government would be mindful of how many negatively-gearing landlords there are in Australia who would be adversely affected by any changes in the short-term. I also discussed how Australia would get major efficiency gains from raising more revenue via GST and cutting less efficient taxes, particularly stamp duties and payroll taxes.

2 Responses to Australian Perspective: 2016 and beyond – keynote presentation to CPA Congress, Brisbane