A comment from a reader on my Friday post on robotics and automation got me thinking about long-term trends in average working hours. Historical data on standard male working hours (from Glenn Withers’s chapter in Vamplew’s Australians: Historical Statistics), which I’ve combined with recent ABS data, show a large drop in average hours worked in the last 100 years. While there was a period in the eighties and nineties when average full-time hours started to increase, this appears to have been unwound in the 2000s (see this ABS article on Trends in hours worked, which shows that average working hours across all workers have fallen over the last few decades as the proportion of people working part-time has increased). 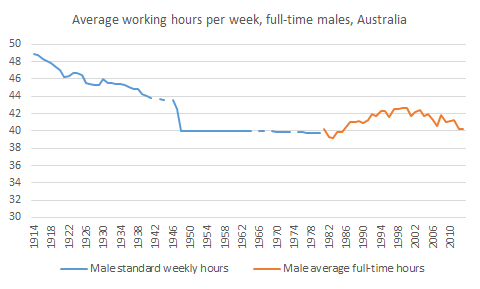 Partly the drop in average hours would have been driven by technological progress, which has improved productivity and incomes. As we became more productive, we bought ourselves more leisure time as well as additional goods and services. As robotics and automation become more prevalent, I expect we’ll be able to buy ourselves more leisure time, and average hours will continue to fall, as more people can then afford to work fewer hours. Of course, with improving communications technology, including video calls, we can probably expect more work-related interruptions at home. The blurring of work and personal lives will continue to be a major issue in workplace and business relations.

N.B. Comparable historical figures back to 1914 for women don’t appear to exist, but I expect the average hours trend has been similar for women working full-time. Of course, the major labour market trend for women over the last 100 years has been rising participation in the workforce due to social and economic factors – a trend which I’ll aim to discuss in a future post.