Why is the national average participation rate now higher than Queensland’s? It’s likely due to a mixture of demographic and economic factors.

Second, as I have noted many times on this blog, Queensland lacks the corporate HQs and the full range of professional jobs that other states have, and this means fewer career opportunities. This may partly explain the lower participation rate in Queensland among 25-34 year old people.* Finally, the greater professional opportunities in southern states may explain why 55-64 year old people in the rest of Australia are more likely to participate in the labour market (see chart below). It’s a bit easier for professionals to continue working as they age than people in manual labour jobs. 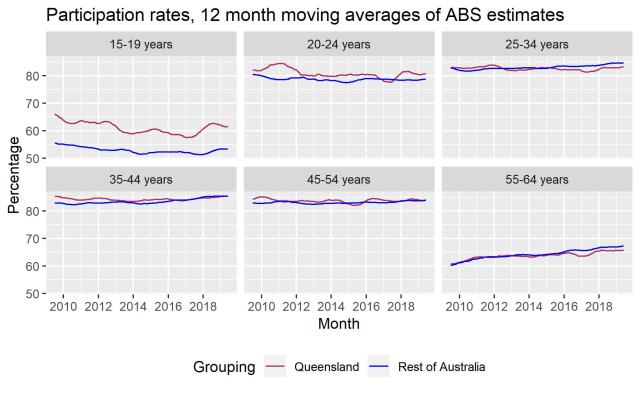 I intend to look deeper into this issue in a future post, and I will continue to advocate for a comprehensive review of Queensland’s policy settings. In this September 2018 post I wrote:

I’d suggest the Queensland Treasury urgently investigates Queensland’s ongoing economic under-performance, delving into whether it’s due to inferior policy and regulatory settings relative to other states and territories. This could be a good job for a revived Office of Economic and Statistical Research (OESR). This arm of Treasury was doing excellent work researching the drivers of state economic growth in the late 1990s and early 2000s. But, in recent years, it has been operating under its original historical name, the Queensland Government Statistician’s Office, and it now appears to lack sufficient resources and ministerial support to undertake in-depth economic research. The state government should consider reviving OESR, with a view to better understanding Queensland’s relative economic performance.

[1] The participation rate is the labour force (employed plus unemployed people) as a percentage of the civilian (i.e. non-military) population aged 15 and over.