Queensland now has two councils, Logan and Ipswich, with state government-appointed interim administrators. The stench of corruption coming out of both council chambers was overwhelming, and Local Government Minister Stirling Hinchliffe has acted appropriately in both cases, appointing Logan’s interim administrator today and Ipswich’s in August last year.

Listening to Steve Austin’s 612 ABC Brisbane Drive program this afternoon, I was fully in agreement with one interviewee who highlighted the problem of declining media coverage of local government matters. Not enough light is being shone on many councils.

We all know that the internet has undermined the business models of traditional media. Newspapers we once relied on for coverage of local politics, such as the Courier-Mail and the Queensland Times, have shed many staff over the last decade, and their coverage of local politics has suffered accordingly. We have the ABC, for sure, and Tim Swanston has been doing a great job of keeping an eye on Brisbane City Council (BCC)—indeed Tim interviewed me following my criticism of the City of Brisbane Investment Corporation last year—but there is generally insufficient coverage of most other councils in Queensland, until the stench of corruption is too strong to ignore.

Queensland needs fewer councils and fewer local politicians. With fewer and larger councils, it would be easier for journalists, ratepayers associations, bloggers, and other concerned citizens to keep an eye on them. Since I started blogging in 2010, I have advocated for more council amalgamations. Queensland has too many small, financially vulnerable councils, so it would be a good start to amalgamate many of these (see chart below). 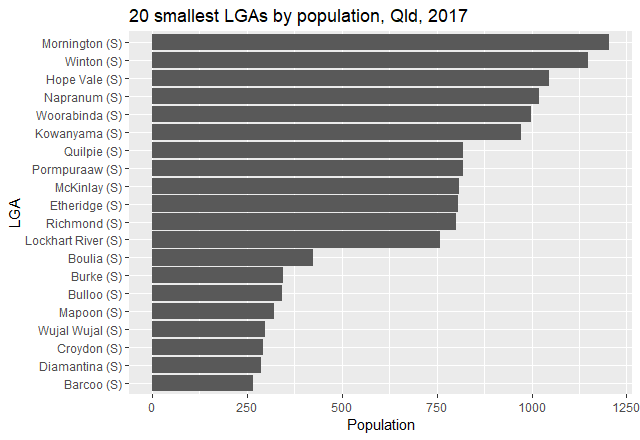 Ipswich and Logan, of course, are not small councils. They have several hundred thousands of residents. It appears that even councils of that size are not subject to  sufficient public scrutiny, and, hence, they are at significant risk of corruption. It may be desirable to have much larger councils, each covering at least one million residents, as BCC does, in which case we should start thinking about regional governments, rather than local governments. Perhaps we could divide Queensland into a handful of regional governments and do away with local governments altogether. I myself have previously commented extensively on the prospect of a new state of North Queensland (see the ABC news article on “Nexit”).

The current local government debacles should prompt us to consider whether there are more desirable governance arrangements than those we currently have.

On the need for a new round of council amalgamations, see my posts:

Council amalgamations may not have gone far enough

Regarding my criticism of the City of Brisbane Investment Corporation, see my posts:

This entry was posted in Uncategorized and tagged brisbane, cbic, ipswich, localgovernment, logan. Bookmark the permalink.