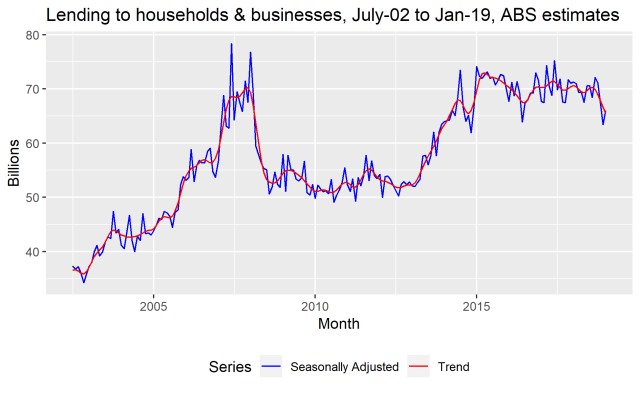 There is a lot of disappointing economic data coming out for Australia lately. Today the ABS released its January 2019 Lending to households and businesses estimates which  confirmed the credit cycle is in the downswing phase (see chart above). This is related to a range of factors, including a weaker property market and falling house prices in Sydney and Melbourne, tighter lending standards possibly related to the banking Royal Commission, and slowing economic activity nationwide, and it will likely reinforce the slowing down of the economy. As legendary US investment fund manager Howard Marks explains in his latest book Mastering the Market Cycle (on p. 137):

…the credit cycle…is both highly responsive to economic developments and highly influential. Lastly it is also extremely volatile. Thus its movements are powerful and extreme, and they greatly affect activity in many other areas. And all these things are exacerbated by the swings of psychology…

Lending to households for both owner occupied and investment properties has fallen massively (see chart below).