The 7 habits of highly effective economists – Part 1: Habits 1 to 3 for private victory

I’ve recently become a huge fan of Tim Ferriss’s extraordinary podcast The Tim Ferriss Show. One of the questions Tim regularly asks his super-successful guests is:

What is the book (or books) you’ve given most as a gift, and why? Or what are the one to three books that have greatly influenced your life?

One book I have lent to people in the past, and which has certainly had a great influence on me, is Stephen R. Covey’s The 7 Habits of Highly Effective People published in 1989. It was popular among commerce and economics students when I started studying at UQ in the early nineties, and I have periodically returned to the book ever since. I thought of 7 Habits when I heard Tim ask the question noted above on one of his podcast episodes, and I started thinking about what the seven habits of highly effective economists would be.

In this post and a subsequent post, I will provide my views on what the 7 Habits mean for economists. This post covers the first three habits, the habits for what Covey calls “private victory”, and I’ll cover the remainder in a future post.

The principle behind this habit is that, to a large extent, you are master of your own destiny. You have more potential influence than you realise. Recognising this can be very useful for economists, who can often become frustrated when decision makers such as government ministers or regulators don’t follow their advice. Think for example of economists or so-called “econocrats” in the Canberra public service, who were incredibly influential in the periods of micro-economic reform in the 1980s and National Competition Policy and tax reform in the 1990s, but who have since found the era of structural reform, for lack of a better term, is over. Since then, multiple grand economic policy schemes, including the Carbon Pollution Reduction Scheme, the Resource Super Profits Tax, and, more recently, the National Energy Guarantee, have failed to secure the political support they needed.

It would be easy for economists to blame politicians, to blame them for being short-sighted and ignorant, but that would be (mostly) unfair, and it would also be unhelpful. If politicians or the community don’t accept your advice, as an economist you need to recognise that either:

Once you recognise the reason why your advice was not followed, you may learn something that can help you influence decision makers in the future. Consider, for example, how many times the most famous economist of the 20th century, John Maynard Keynes, failed to convince decision makers on important economic issues. His advice not to punish Germany was rejected by Lloyd George at the Paris Peace Conference in 1919, and his advice against putting Britain back on the gold standard was rejected by Churchill, then Chancellor of the Exchequer, in 1925, with disastrous economic consequences. Keynes was right, but he failed to convince Churchill, who listened instead to the voices of conventional finance, particularly Montagu Norman of the Bank of England, who wanted Britain back on the gold standard.

After such huge failures, did Keynes give up? Of course not, he continued working and writing books and articles, for both his fellow academic economists and ordinary people, and eventually in 1936 he wrote the General Theory of Employment, Interest and Money, the book that changed everything. Keynes then won the most important debate of all, regarding how the government should manage the economy. The mixed economy we have today, with government accounting for one-third or more of GDP in advanced economies, was given intellectual justification by Keynes. He was the inspiration for what John Kenneth Galbraith called the “Mandarin Revolution” in Galbraith’s outstanding late 1970’s BBC television series The Age of Uncertainty.

For those who are averse to Keynes, you might like to think instead of Milton Friedman, who spent decades arguing for free market policies, and who saw the US federal government massively expand its influence in the sixties and seventies, before his ideas were adopted to varying degrees in the US, UK and many other economies. Of course, Friedman’s great contribution to macroeconomic policy, monetarism, was a complete failure, sending Thatcher’s Britain into deep recession in the early 1980s, although economists did learn a lot about how monetary policy actually works from the British monetarist experiment.

So, if you’re an economist and you feel you’re under-achieving, I would say that the habit of being proactive is a good place to start. Don’t wait for your employer, clients, politicians or journalists or whoever you want to influence to ask for your analysis and views. Do the work and publish it, in blogs or discussion papers, or record your thoughts in podcasts or videos. Seek out opportunities to assist people who need your help. So if you hear someone on the radio or see them on the TV, and you think they could benefit from some information or analysis you could provide, then get in touch with them and share your knowledge and wisdom.

Habit 2. Begin with the end in mind

This habit is equivalent to Simon Sinek’s instruction to Start with Why. (If you haven’t watched his amazing TED Talk yet I highly recommend it.) As an economist, you should recognise that you’re usually trying to either:

Generally, you’re trying to better understand economic issues and to communicate your understanding to an audience. While ongoing academic research in economics is important and essential, I believe that economists provide the most value by contributing to the public’s understanding of economic issues. As an economist you should aim to improve the community’s understanding of economic issues and to solve economic problems. To do this successfully, you will need to understand the relevant economic phenomena, project, or policy so well that you can clearly articulate your analysis and advice to any educated layperson, not just to your fellow economists. You may need to do much more research and data analysis than you expect, and you might like to discuss your findings and opinions with colleagues, to test your understanding, assumptions, and findings.

Regarding this habit, I would note that economists need to choose the tools that are best suited to the job in hand. Don’t use a theoretical or econometric model just because you think it’s elegant or clever, or because you want to show off. Use the most appropriate tool for the job. As Paul Krugman noted in his 2018 Oxford Review of Economic Policy article Good enough for government work?:

This paper argues that when the financial crisis came policy-makers relied on some version of the Hicksian sticky-price IS-LM as their default model; these models were ‘good enough for government work’. While there have been many incremental changes suggested to the DSGE model, there has been no single ‘big new idea’ because the even simpler IS-LM type models were what worked well. In particular, the policy responses based on IS-LM were appropriate.

The financial crisis was a huge blow to those technically brilliant economists who had spent many hours learning and building theoretically elegant but practically useless Dynamic Stochastic General Equilibrium (DSGE) models. I made a similar point in the discussion time after LSE Professor Mary Morgan’s public lecture on economic modelling at UQ in 2016. Similar to other professionals, economists need to focus on solving the problem in hand, as directly and efficiently as possible.

In recent years, Georgetown computer science professor Cal Newport has shown us how to carve out big chunks of time to undertake the non-urgent, important work, such as research on important issues, writing a book, composing a symphony, or doing whatever is important to you. Newport talks about the importance of Deep Work and gives you tactics for doing it (e.g. avoiding the internet as much as possible, ignoring most emails which are usually inconsequential, or more radically giving up Facebook and other social media completely).

For economists, deep work involves such things as writing reports, articles and books, and doing the data analysis and thinking that support these outputs. Economics is a challenging discipline, and you need large amounts of uninterrupted time to do the work. That’s why I generally avoid meetings unless they are absolutely necessary for projects I’m working on, and I’ve tried to create as comfortable an office for myself as possible, so I’m happy to spend lots of time in it working on projects, articles and speeches (e.g. see photos below). If I didn’t have a quiet place where I can work without interruptions like my office, I doubt I ever would have finished my book Beautiful One Day, Broke the Next. Writing that book was a good example of how difficult it can be to complete big projects involving deep work. I originally thought I’d finish it in 3-4 months but it ended up taking me nearly two years, including lots of after-hours time in the office. 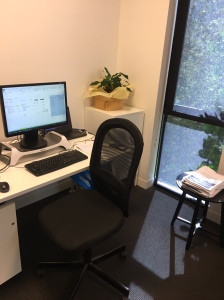 The habit to put first things first also involves, according to Covey, such things as:

…building relationships, writing a personal mission statement, long-range planning, exercising, preventive maintenance, preparation—all those things we know we need to do, but somehow seldom get around to doing, because they aren’t urgent.

An example of how I’ve put this habit into practice in recent years is my development of a set of scripts, written in the freeware programming language R, to automate a lot of my data analysis. This has saved me many hours and avoided lots of frustration with notoriously unreliable and unstable Excel workbooks, as discussed in my recent post:

I’ve now discussed the first three of the seven habits. The remaining habits, which I’ll discuss in a future post are: 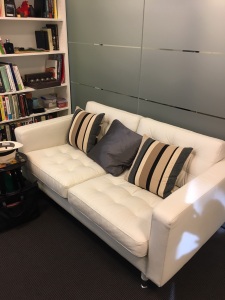 A comfortable chair is a good place for long phone conversations, reading papers, and planning presentations and reports.