Over 2018 I have commented regularly that the Queensland economy is under-performing relative to NSW and Victoria, and this has been reflected in the state’s unemployment rate remaining above 6% while the national rate has fallen toward 5%. It should be borne in mind, however, that population and economic growth in the southern states have been boosted by very high rates of net overseas migration (at 1-1.5% of population p.a. in the southern states compared with 0.6% in Queensland). These rates are placing large strains on infrastructure in these states and may not be sustainable.

I have taken the opportunity provided by the release just before Christmas of the ABS’s demographic data for June 2018 to analyse population change by component by state/territory (see the facet plot below for financial years 1987-88 to 2017-18).

In Queensland, natural increase (i.e. births minus deaths), net overseas migration, and net interstate migration make similar contributions to total population growth, while in NSW and Victoria, net overseas migration is by far the largest component of population change. If this pattern continues, the difference in the population composition between Queensland and the southern states will become even starker. At the time of the 2016 Census, around 23% of people usually resident in Queensland were born outside of Australia, compared with around 30% in both NSW and Victoria (N.B. high proportions of people didn’t answer the relevant question on the Census so these figure should be treated as indicative only).

In the facet plot above you can also see how Queensland’s rate of interstate migration, which has picked up significantly over the last couple of years, is still well below what it was during peak periods in the past, particularly in the nineties, a point which was well made by Ross Elliott in his post Net interstate migration to Qld is on the rise: Does this mean we are about to boom? 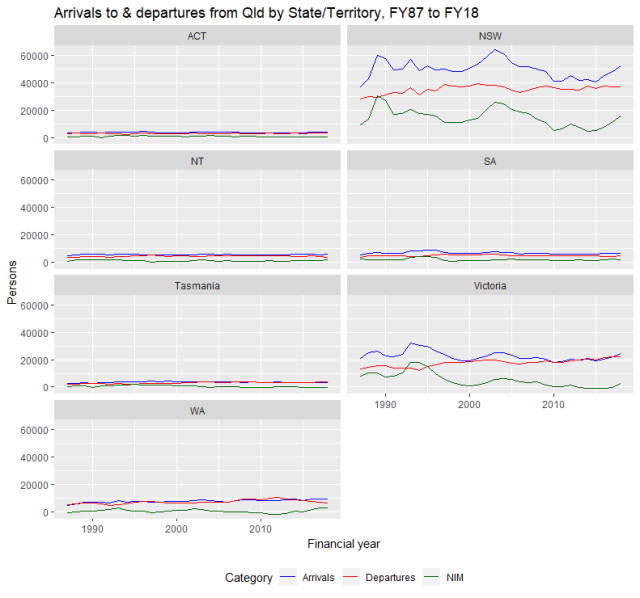