Sadly, Queenslanders are getting accustomed to regular stories of failures of state public administration, with two major stories this week. We have learned about the $250 million digital hospitals program cost blow out and the results of the inquiry into the botched $4.4 billion procurement of the New Generation Rollingstock (NGR) trains. Yesterday the Courier-Mail reported:

AN INQUIRY into the State Government’s botched delivery of new trains worth $4.4 billion could end in a lawsuit.

But he said the inquiry exposed a lack of consultation with the disability sector.

The design issues were not raised with Transport director-general Neil Scales until 2016 – three years after the contract for 75 new trains was signed with a consortium led by manufacturer Bombardier.

It’s pretty hopeless and rather incredible that senior public servants were unaware of the major issues involved in a multi-billion dollar procurement. They need to be accountable for either the lack of proper stakeholder consultation conducted by their department or for what may be a “she’ll be right” culture of dismissing and not conveying bad news up the chain of command. I’m surprised there aren’t loud calls for mass sackings of senior Transport and Main Roads bureaucrats.

Queensland’s sub-standard public administration is a major theme of my new book Beautiful One Day, Broke the Next, now available for pre-order from the Connor Court website. This is a state in which we’ve had a water crisis, health crisis, electricity crisis, health payroll debacle, fake Tahitian prince scandal, hospitals cost blow out, rail fail and the NGR procurement snafu, among other public administration stuff ups.

There is something deeply wrong with Queensland’s public administration. Partly this is due to the lack of an upper house, which was abolished in the 1920s, although I’m not necessarily advocating for one to be restored. We need to strengthen the role of parliamentary committees in overseeing government business and also we need to improve the quality of the state public service. It’s been widely observed that successive governments have politicised the public service and we now have very few long-term career public servants with the skills to administer high quality policy development and program delivery.

On Queensland’s recurrent failures in public administration, in addition to my book, I recommend Ken Wiltshire’s excellent 2016 Courier-Mail opinion piece Take the politics out of policy. 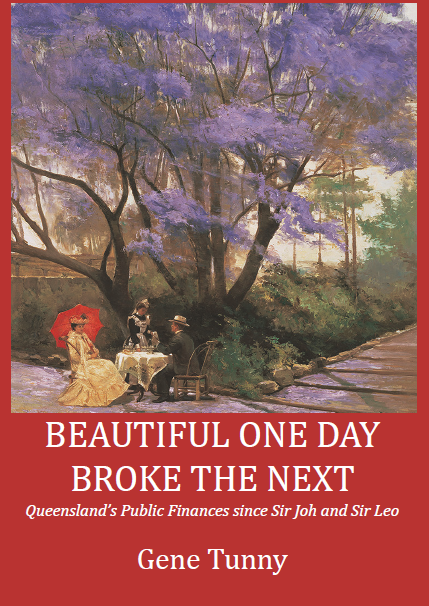