Yesterday I had an enjoyable chat with Steve Austin on his 612 ABC Brisbane Drive program about the latest ABS Labour Force estimates, which, as I reported in yesterday’s post, revealed Queensland is the only state with an unemployment rate of 6% or more.  You can hear our discussion, in which I comment on various regulatory and policy settings, as well as the loss in the 2000s of Queensland’s previous status as the low tax state, from 2:02:55:

While Queensland’s unemployment rate is typically higher than the national rate (see chart below), the current 1.1 percentage point difference between the rates is currently above the 40-year average of 0.4 percentage points. If the current difference were due solely to a surge in workforce participation related to strong jobs growth I wouldn’t be concerned. Alas, it isn’t. Queensland’s rate of jobs growth is less than half the national average. The Queensland economy continues to under-perform. 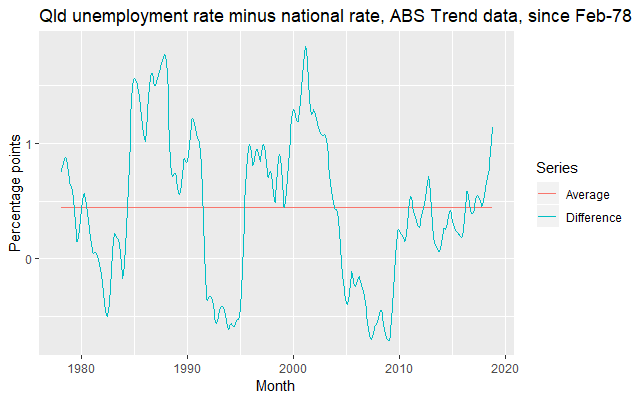