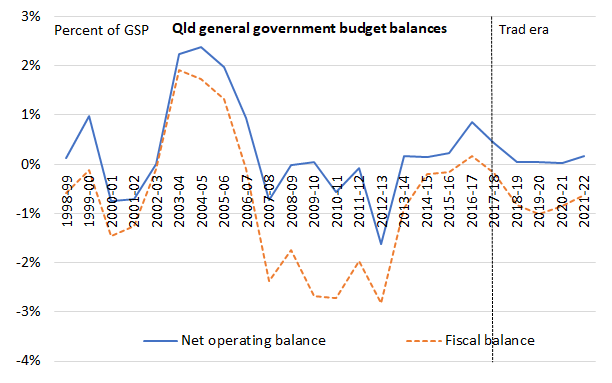 I made two trips to ABC’s South Brisbane studios yesterday. On the Breakfast program, hosts Bec Levingston and Craig Zonca and I chatted about Queensland’s growing state debt, the distinction between good and bad debt, and the state’s credit rating. I spoke after the Deputy Premier-Treasurer had chatted with Bec and Craig, and you can hear me from around 2 hours, 34 minutes into the recording:

On Steve Austin’s Drive show in the afternoon, Steve and I chatted about my impressions of the budget, released just three hours earlier. I told him I thought the projected operating surpluses were too thin and actually negligible when compared with gross state product (see chart above based on data published in the budget as well as ABS data). I also noted that, even according to the metrics the government prefers, the budget projects a deterioration in Queensland’s fiscal position. For example, on p. 48 of Budget Paper 2 we discover:

You can hear Steve and me chatting from around 1 hour, 1 minute and 50 seconds into the recording: