Just before I appeared on 612 ABC Brisbane’s Breakfast program last week, one of the presenters Bec Levingston asked Deputy Premier Treasurer Jackie Trad what it would cost to air condition every classroom in Queensland, a question she obviously couldn’t answer without notice. Having spent the bulk of my schooling in un-air-conditioned classrooms in tropical Townsville, it struck me as a peculiar question, and I though air conditioning every classroom in the state would be a massive extravagance. That said, it did prompt me to look at what the state government currently spends on education capital works and compare it to what it spends on other priorities.

In state budget paper 3, the Capital Statement, we are starting to see the huge cost of the number one extravagance in the state at the moment, Cross River Rail. Total spending on property, plant and equipment for Cross River Rail, which is part of the Treasury portfolio, is estimated to be $733 million in 2018-19. This $733 million spent in inner city Brisbane on Cross River Rail is greater than total property, plant and equipment purchases for the Education portfolio of $674 million across the whole of Queensland! To be fair, I should note that if you add in $99 million of capital grants to other entities (which I suspect includes private schools and universities), total estimated education capital spending comes to $773 million in 2018-19. Still, the fact Cross River Rail’s total capital spending is of the same scale as education capital spending across the whole state should raise eyebrows. Incidentally, the region benefiting the most from education CAPEX is inner city Brisbane (see chart below). Political commentators would observe the government is worried about a Greens takeover of inner city seats.

In per capita terms, regions other than inner city Brisbane doing very well out of the state government’s capital budget include Toowoomba, the Queensland outback, and Central Queensland (see maps below). Toowoomba, of course, is benefiting from the Second Range Crossing, on which an estimated $534 million is allocated to be spent by Transport and Main Roads in 2018-19. 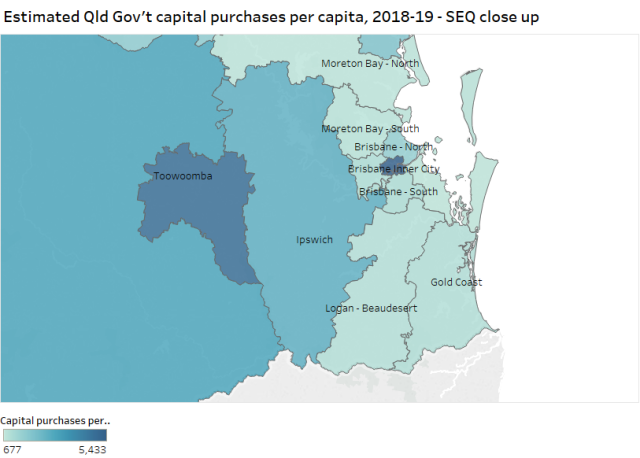