Ten years ago, small businesses, those with fewer than 20 employees, employed over half of private sector workers in Queensland, but that is no longer the case. This was revealed in an excellent note, Small Business in Queensland, published yesterday by the Queensland Government Statistician’s Office, part of the Queensland Treasury:

The trend decline occurred across Australia, although the fall was greater in Queensland than the rest of Australia, on average.

Incidentally, medium-sized businesses and large businesses (200+ employees) make up only 2.6 percent of total businesses, but account for 56% of employees (see chart below).

Why have small businesses declined in relative importance? Many factors have probably contributed to the downward trend, including, among others: 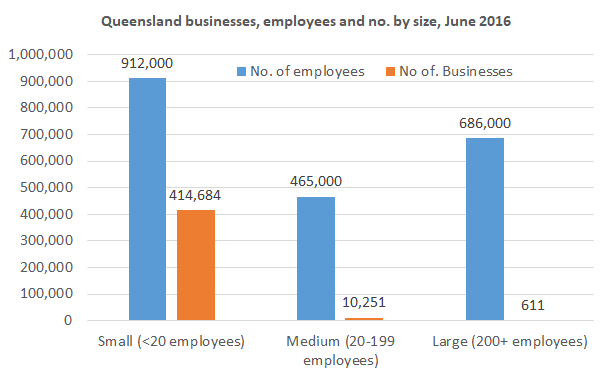 This entry was posted in Uncategorized and tagged abs, qld, queensland, smallbusiness. Bookmark the permalink.