UQ’s Professor John Quiggin was only called upon Wednesday to fill in for an ill Richard Holden at the annual Colin Clark Lecture at Brisbane’s old Customs House yesterday morning, but nonetheless he managed to deliver an outstanding presentation titled:

Quiggin gave a very lucid explanation of what economics tells us about optimal road pricing. Unfortunately, what ends up happening in practice is completely at odds with sensible economics. Our current system of charging for roads is haphazard and not economically sensible. In Quiggin’s view, we could improve community welfare by applying a system of well-designed road charges based on the traffic congestion that motorists contribute to, and by cutting poorly-designed charges, such as motor vehicle registration, in a revenue-neutral fashion. Motor vehicle registration is particularly bad because it is unrelated to the extent of road usage.

Also subject to Quiggin’s disdain is the current unscientific way we toll roads. We have tolled some new roads and tunnels either because our politicians think tolls are necessary to pay for them, or because we have granted a private operator the right to toll them, through public-private partnership (PPP) arrangements. But if a new road delivers net benefits to the community, it can make sense to incur “good debt” to pay for it. Further, it may not have been necessary to have entered a PPP at all, and governments have often entered into PPPs for the wrong reason: to avoid debt showing up on the government’s balance sheet.

We know that charges on toll roads are unlikely to be set at the right level. A rational system of road charges would vary road charges according to the level of congestion on the road, which will vary according to the time of day. But this typically does not occur on toll roads. Toll roads are often severely under-utilised, suggesting the price of using toll roads (relative to the price of using free roads, which are competitors) is too high, and this is inefficient from the community’s point of view. The marginal cost of having another car travel on an under-utilised toll road can be very low, and much less than the cost of the toll. In contrast, on a busy non-tolled road, say Coronation Drive, the marginal cost of having another car on the road, creating congestion and slowing down other roads users, can be much higher. Ideally, motorists would take that marginal cost into account when making the choice of whether and what time to drive. But of course they do not, so there is socially inefficient congestion on our free roads.

To improve the efficiency of our road network, we need to adopt a system of road charges based on congestion, applying to the whole road network, and moving away from the current situation of highly-congested free roads  and under-utilised toll roads. Practically, we could follow the lead of London and Singapore, and start off by introducing a charge to enter the CBD, possibly limited to during the daytime. But eventually charges could be based on the usage of arterial road in peak periods.

Quiggin noted that he thinks the reason politicians oppose a CBD congestion charge is because all the decision makers work in the CBD and hence would be adversely affected, as would most of the people they work and socialise with. But he thinks it would be good policy and may be politically feasible. Quiggin argued that any revenue raised by congestion charges could be used to pay for a reduction in motor vehicle registration, which no doubt would be politically popular. He would also have the government buy privately-owned toll roads, with “good debt” if necessary, so they can be incorporated into a rational system of road pricing.

Road pricing was a fine topic for a Colin Clark Lecture, as Colin Clark himself had written on the topic and would have been in strong agreement with much of Quiggin’s lecture. In his 1982 book Regional and Urban Location, published by UQ Press, Clark observed (on p. 231):

The proposal to tax congestion as an adverse economic externality is not new—it was proposed by Pigou as long ago as 1920, when road congestion was a rarity.

So the concept of a traffic congestion charge is nearly one hundred years old. It is about time we apply the concept in Australia and move toward a more rational system of road pricing, using the money raised to fund a cut in highly-regressive motor vehicle registration charges.

My previous posts on road pricing include:

RACQ should push for demand management options such as congestion pricing 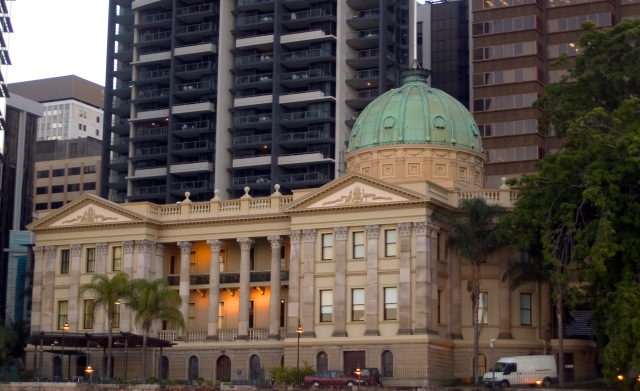 Brisbane’s old Customs House was the scene of the 2017 Colin Clark Lecture, hosted by the UQ School of Economics