Economists and market watchers were very excited yesterday by the May job vacancies data released by the ABS. Nationally, job vacancies were 1.6 percent higher (in seasonally adjusted terms) in May than in February, the time of the previous quarterly reading, and 11.4 percent higher through-the-year (e.g. see Pete Wargent’s post). The ABS does not seasonally adjust the state-level data, but we can examine the trend using the through-the-year change, and it is very positive for Queensland, with vacancies in May 2017 being 17.8 percent higher than in May 2016 (see the chart below). This is further evidence of an improving labour market in Queensland in 2017 (see my post on the May labour force estimates from the ABS).

The ABS estimates that the bulk of job vacancies are in the private sector (see chart below). How can this be reconciled with the common view that the State public sector has been responsible for the bulk of new jobs in the Queensland economy? To do so, it needs to be recognised that job creation and destruction are occurring at the same time in the private sector, and some sectors can be expanding while others are contracting. In recent years, some sectors, particularly mining, have been shedding large numbers of jobs. So, on balance, job creation in the private sector has appeared weak and, at times, government jobs have appeared to be dominating employment growth in the aggregate data (e.g. see my post from last July Were 80% of new jobs in Qld public service jobs?). 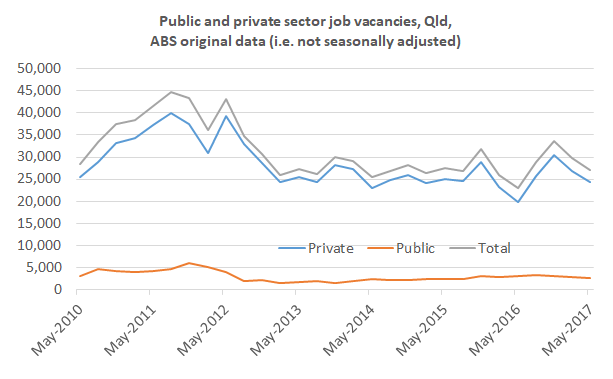