Last Friday, in his opening statement to the House of Representatives Standing Committee on Economics, RBA Governor Phil Lowe observed:

“Nationally, measures of business conditions have picked up noticeably recently. For some time we have been waiting for a lift in non-mining business investment. It has been a long time coming. Encouragingly, in New South Wales and Victoria we have now seen a reasonable pick-up in investment. However, we are yet to see this in most other states, where the unwinding of the mining investment boom continues to affect the overall business climate. With the decline in mining investment coming to an end, we hope to see a broader pick-up over time.”

It is unfortunate the Governor did not refer to Queensland. Even though the unwinding of the mining investment boom continues to adversely impact on total real business investment (i.e. capital expenditure), as investment in buildings and structures continues to fall, capital expenditure by businesses in new equipment, plant and machinery is growing strongly (at 7.9% in December quarter and 12% over 2016). Indeed, recent data appear more encouraging in Queensland than in NSW, where a surge earlier in 2016 was partially unwound in the last quarter, and in Victoria, where business investment in equipment, plant and machinery has plateaued (see chart below).

Queensland’s recent recovery in capital expenditure in equipment, plant and machinery would be related to improving business confidence over the second half of 2016, and supports the view that the economic outlook for Queensland is superior to other States in 2017. Certainly, Queensland is currently benefiting from a surge in tourism, new LNG exports, and a recovery in coal prices in the second half of 2016, among other positive factors. The Queensland Treasury must be feeling reasonably confident about its forecast in the 2016-17 Mid Year Fiscal and Economic Review that:

The latest capital expenditure data from the ABS also remind us about the huge shock the Queensland economy experienced from the construction of the LNG processing plants at Curtis Island off Gladstone, as well as other resources sector construction projects. Capital expenditure on buildings and structures in Queensland is still declining from the massively elevated levels of a few years ago (chart below). 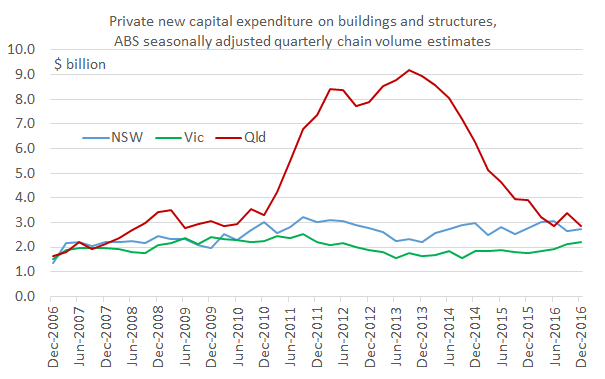 As I have noted in many previous posts, the end of the mining construction boom has been painful in parts of Central and Northern Queensland. Incidentally, I was briefly mentioned in today’s Courier-Mail regarding the paper’s #GoQld Action Plan to revive regional Queensland:

“Chamber of Commerce and Industry Queensland senior policy adviser Catherine Pham said lifting the payroll tax exemption threshold for businesses from the current $1.1 million was crucial. “The business community has consistently viewed payroll tax as a tax on employment and a penalty on giving someone a job,’’ she said.

Economist Gene Tunny agreed such a move would boost jobs. He also supported a push for relocating some public servants to regional cities.”