The best economics and finance book of 2016 is undoubtedly Sebastian Mallaby’s masterful biography of former Federal Reserve Chairman Alan Greenspan, The Man Who Knew. Greenspan was the man who knew that superficially healthy economies, with steady economic growth and low-inflation, could nonetheless be building up unhealthy imbalances, such as speculative asset price bubbles. But he failed to avert the huge US housing bubble and financial market excess that ended so spectacularly in 2008. Greenspan’s reputation as the all-time-great central banker was shattered by the financial crisis. Mallaby concludes that Greenspan’s mistake was taking the path of least resistance:

“Controlling asset prices and leverage was hard; fighting inflation was easier. At a time when deregulation and globalization were bringing down prices anyway, and when Paul Volcker had established the legitimacy of an inflation-fighting Fed, Greenspan chose the path of least resistance.”

Mallaby makes a strong case that Greenspan should have seen it all coming, referring to previous statements from Greenspan in lectures he gave as an Ayn Rand devotee in the sixties, his doctoral dissertation, and numerous speeches and testimonies—recall “irrational exuberance”.

The book is not wholly unfavourable to Greenspan, however. It details Greenspan’s role,  along with US Treasury Secretary Robert Rubin and his deputy Larry Summers, in the so-called Committee to Save the World, which helped ameliorate financial crises associated with Mexico and Korea in the nineties.

The book includes a wealth of interesting detail on Greenspan’s private life, including his relationships with Ayn Rand (an intellectual relationship) and Barbara Walters (a romantic relationship), among others. It is also informative on Greenspan’s involvement in Republican Party politics in the 1970s, including his bid, in alliance with Henry Kissinger, to have former President Gerald Ford run as the Vice Presidential candidate with Ronald Reagan in 1980. Ford would have been almost a co-President, Kissinger would have been returned as Secretary of State, and Greenspan would have been Treasury Secretary. This very odd proposal almost became a reality, with Gerald Ford only losing his nerve at the last minute, forcing Reagan to invite George Bush senior on to the ticket.

This book would make an excellent Christmas present for anyone interested in economics and finance. Copies are available at Folio Books on Edward St in Brisbane and most likely at other good bookstores. 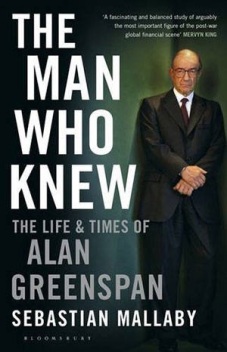