Guest post – Where is NSW getting the money to fund its massive infrastructure spending?

I am delighted to publish another guest post from my friend and fellow economist Dr Alistair Robson. Views expressed in this article are Alistair’s, and should not necessarily be attributed to me.

Where is NSW getting the money to fund its massive infrastructure spending?

The NSW Government will spend about $20 billion on infrastructure through its Rebuilding NSW plan. Where is it getting the money from to do this? 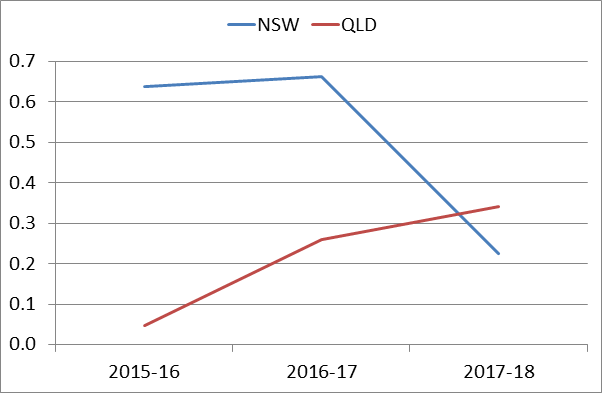 General Government expenditure is forecast to be higher in Queensland than in New South Wales in 2015-16 through to 2017-18.  Over the forward estimates period it will fall as a proportion of GSP in both states. Queensland typically spends more as a proportion of its GSP due to many reasons, such as a larger state area and provision of new infrastructure for a usually faster growing population.

Both the NSW and Queensland state governments forecast operating surpluses in the coming four years.  These sets of forecasts are based on questionable sets of assumptions.  The NSW budget surplus partly depends on relatively low interest rates propping up house prices, as stamp duty revenues are highly sensitive to house prices, while the Queensland budget surplus partly depends on overseas demand for LNG.

In the NSW budget, of interest to Queensland is the continual upgrade of the Pacific Highway which should mean lower travel times for trucks delivering intra‑state exports from Queensland to Southern states.  Also the southern suburbs of the Gold Coast will benefit from the major upgrade of the Tweed Heads Hospital.

Looking forward, budgetary pressures from health services will continue in NSW. This is particularly so in the fast growing Western Sydney area and exemplified by the recent media coverage of pressures at the Nepean Hospital. Over the long-term, according to the NSW Intergenerational Report, health expenses are expected to grow at 6 percent per annum.  The construction of Badgery’s Creek airport will also require a lot of infrastructure such as rail and roads which will add to budgetary pressures in coming years, as it is not currently factored into the budget forward estimates.

This strong fiscal position will help the NSW Government spend about $20 billion through its Rebuilding NSW plan.  Deloitte Access economics estimates the plan will produce $300 billion in benefits for the NSW economy and 100,000 extra jobs over 20 years to 2035/36.  Much of this is spending is due to ‘asset recycling’.  Asset recycling is where the proceeds from the long term leases of existing assets are used to fund the building of new infrastructure.  That is, asset recycling is effectively using privatisation proceeds to fund new infrastructure. Asset recycling allows the Government to invest in new infrastructure without increasing borrowing and it can also improve the budget bottom line by funding capital expenditure that may otherwise have had to be funded by the Government budget.

The impetus for the asset recycling scheme was a report on Public Infrastructure released by the Productivity Commission in 2014.  The report said there was an urgent need to comprehensively overhaul processes for assessing and developing public infrastructure projects. Asset recycling was further advanced by the ex-Treasurer Joe Hockey with a $5 billion fund to provide a 15% top-up from the proceeds of any asset sales/long term leases. NSW has been the largest recipient of funds to date with the $10.3 billion for electricity wholesaler Transgrid, and presumed money from the long term lease of 50.4% of both Ausgrid and Endeavour Energy to make a total for all three at an expected $20 billion. After a knock back by the Federal Treasurer for a Chinese led consortium of China’s State Grid and Hong Kong based Cheung Kong Infrastructure due to security concerns to buy Ausgrid, it will now be sold for $16.189 billion to a consortium of IFM Investors and superannuation fund AustralianSuper .

The money will be spent on numerous infrastructure projects including the Sydney Metro and other urban public transport projects ($8.9 billion), Light rail projects (Parramatta light rail, CBD and South East Light Rail, and Newcastle Light Rail), and regional freight corridors and other regional roads such as the Newell highway, Princes Highway and New England Highway $3.7 billion).

The largest urban road infrastructure projects will be the several motorways under construction or expansion — specifically the $11 billion Westconnex project and the $3 billion Northconnex project. Both should ease congestion and increase productivity in some of Australia’s most economically important and highly congested transport routes.  As a side effect the Westconnex project allows for fewer trucks along Parramatta road and enhanced urban renewal and corresponding commercial land development opportunities (as has the Newcastle light rail project). The NSW Government anticipates $20 billion in economic benefits from Westconnex as well as 10,000 jobs in the construction phase.

While NSW net debt is also increasing to partly pay for this infrastructure, it will be producing a valuable asset and remains low as a proportion of GSP and revenue.  The Queensland Government could consider, assuming quality business cases by an independent infrastructure body, following suit and use relative low interest rates to spend more money on infrastructure such as widening the M1, M7 and extending the Gold Coast heavy rail line.  These investments would boost economic efficiency in future years at a historically low cost of debt.

As with any government process there will be winners and losers.  One solution is better communication as Dr Matthew Beck of the University of Sydney suggests (http://sydney.edu.au/business/itls/thinking/opinion/asset_recycling). He writes that voters are willing to accept asset privatisations if the communication message (and style) is clear there will be benefits.

Dr Alistair Robson is a Sydney-based economist. He has a PhD in Economic Geography from the University of Queensland.

2 Responses to Guest post – Where is NSW getting the money to fund its massive infrastructure spending?