It was a fantastic week to be an economist in Brisbane, with two excellent events, the BDO Economic & Political Update on Tuesday morning at BCEC and the ESA Qld-Nine Squared seminar on Cost-benefit analysis in contemporary project evaluation at QUT on Wednesday afternoon.

The Economic and Political Update 2016 continued BDO’s track record of excellent breakfast functions, following on from a very informative and interesting Budget seminar in May. Treasurer Curtis Pitt gave a good account of the State’s economic outlook, and I was pleased he quoted my recent comments on the SEQ-regional Queensland divide that were reported by Paul Syvret in the Courier-Mail’s most recent Queensland Business Monthly. You can hear the relevant quote at just after 34 minutes into the video of the function (https://www.youtube.com/watch?v=YQBVeABh2y8).

The highlight of the function was an outstanding panel discussion moderated by ABC Senior State Political Reporter Chris O’Brien, which saw some sparks fly between the Treasurer and CCIQ Director of Advocacy Nick Behrens. The Courier-Mail has reported:

“We couldn’t help but notice that CCIQ advocacy director Nick Behrens and Treasurer Curtis Pitt were kept separated during a BDO breakfast panel discussion this week.

Behrens and Pitt have endured a rocky relationship in recent weeks, after the former made some particularly critical comments about the latter in a very public manner.

That was quickly followed by Behrens blowing the Government’s cover on plans to make Easter Sunday a public holiday under the cover of a review of trading hours.

Both were all smiles during the breakfast (though Behrens did correct the Treasurer about one particular issue during proceedings). It likely helped that there were two chairs between them.”

I recall two points Nick actually challenged the Treasurer on.

First, in response to the Treasurer’s reference to ACCC Chairman Rod Sims’ recent critical words on privatisation, Nick said that the ACCC Chairman did not really argue against privatisation. Instead, he just made the obvious point that there should be appropriate regulation of privatised monopoly businesses. Nick went on to give an outstanding monologue on the economic benefits of privatisation.

CCIQ members are certainly getting good value from Nick in terms of frank and fearless advocacy on their behalf. Overall, both the Treasurer and Nick acquitted themselves well, and the audience very much enjoyed the robust exchange!

ESA Qld, of which I am the Secretary, and Nine Squared, a transport economics consultancy, teamed up on Wednesday afternoon to host an intellectually stimulating facilitated discussion between academic experts, public officials, and professional economists on the current use of cost-benefit analysis (CBA) in project evaluation.

UQ Associate Professor Richard Brown, who co-authored the leading international CBA textbook (see image below) made the excellent suggestion that we should engage in ex post reviews of CBAs. That is, we should check, for example, if infrastructure projects ended up delivering the benefits that were promised. Such an exercise would likely reveal the types of projects we should be skeptical about, such as large dams and irrigation schemes in regional areas. In fact, Jim Binney of Mainstream Economics and Policy appears to have already done just that for the Burdekin Falls Dam and Paradise Dam, finding that both dams failed to deliver projected net benefits (see Jim’s estimates quoted in this WWF submission in response to the Federal Government’s Agricultural Competitive Green Paper.) This type of exercise should be done more often.

Another excellent point made in the seminar came from Ben Ellis from Nine Squared, who noted that value capture (e.g. through a betterment levy) might improve the benefit-cost ratio of projects, by providing project funding that is associated with a lower efficiency loss than alternative funding through other taxes. We know from research by UQ’s Harry Campbell, for example, that one dollar of revenue costs more than one dollar to raise due to the efficiency losses from taxes; it can cost upwards of $1.30 according to some estimates.

I made the final comment from the floor regarding the need for transparency in CBA studies and business cases, and I called for the Cross River Rail business case to be released in full. Building Queensland has so far only released a pathetically thin summary, which is terrible from a transparency perspective. There appeared to be much support in the room for my position, which was very encouraging. 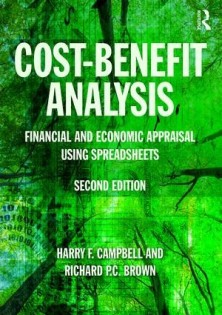 If you only read one book on cost-benefit analysis, make sure it’s this one.