Queensland Treasury econocrats should start investigating measures to improve our productivity performance, after ABS State Accounts data released on Friday confirmed a big slowdown in living standards growth over the last decade or so – measured, roughly I admit, by real Gross State Product and Income per capita (see charts below). This is not just due to the mining slowdown, given that mining was still a major contributor to the economic growth that did occur in 2013-14 (see Pete Faulkner’s post Mining & construction led Qld GSP in 2013-14 in which Pete explains why real Gross State Income actually fell in 2013-14). Instead, in my view, much of it probably reflects the slowdown in productivity growth that has occurred (across Australia) due to a slower pace of economic reform than in the eighties and nineties. Hence, a renewed focus on productivity by all levels of Government would be welcome. 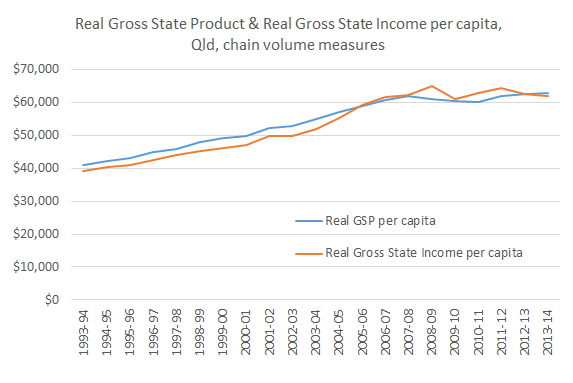 Regarding what the Queensland Government should do, it should:

On the taxi industry, I’ve been very pleased that the Transport Department is turning a blind eye to Uber, because Uber use appears to be growing rapidly and is posing a big threat to the protected positions of Yellow and Black & White Cabs.