Far North Queensland-based economist Pete Faulkner published a great analysis of the ABS labour force estimates for May on his blog yesterday (Jobs data in Qld is poor again):

Unfortunately the picture in Queensland continues to be a weaker one. Although the seasonally adjusted unemployment rate managed to fall slightly to 6.4% (from 6.5%) this is on the back of further job losses (down 1,700) with even more full-time jobs going (4,500). The only reason the unemployment rate has managed to drop is the decline in the Participation Rate to a level not seen since Sept 2004. Looking through the PR effect we see the Employment:Working Population measure down to 60.8 (it’s lowest since Nov 2014). The Trend data doesn’t provide any brighter notes with the Trend unemployment rate rising to 6.4% (from 6.3%…which was in turn revised up from 6.2%). Trend employment growth in the Sunshine State now stands at just 1% while the working population is increasing at 1.4%…

The point about the participation rate is an excellent one. It is likely that many Queenslanders who are marginally-attached to the labour force have temporarily given up looking for a job because of the under-performing economy (see figure below). 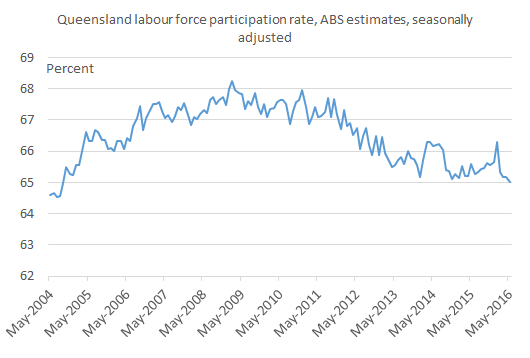 Also see the latest labour force brief from Queensland Treasury which clearly shows the divergence occurring between Queensland and the rest of Australia as the local economy under-performs.