My comments on super repatriation in today’s Courier-Mail 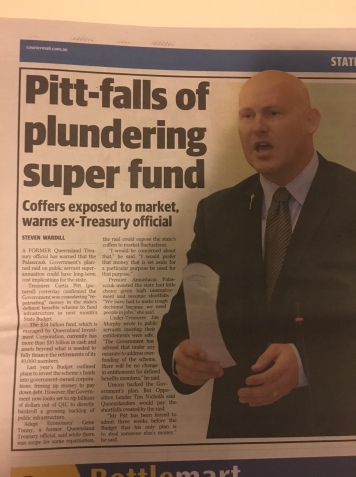 I am obviously concerned about the possible risks associated with the State Government’s planned withdrawal of funds set aside to meet defined benefit superannuation liabilities, and I am quoted to this effect in today’s Courier-Mail, following a discussion I had yesterday with the paper’s State Political Editor Steven Wardill. But, as I have stressed to journalists I have spoken to today, we really need to see the full details of the Government’s plans before we can make a final judgment.Based on the State Actuary’s estimates, the Government is around $10 billion ahead in meeting its defined benefit super liability. There may well be a case for repatriating a small portion of this surplus to the Budget, so long as it is used wisely, and so long as there is still a substantial buffer to protect against sharemarket movements and the risk the liability could be greater than estimated by the State Actuary. Until we see the details of how much the Government intends to withdraw and what it intends to do with the money, it is difficult to be more definitive.

My comments reported in today’s Courier-Mail were as follows:

Adept Economics’ Gene Tunny, a former Queensland Treasury official, said while there was scope for some repatriation, the raid could expose the state’s coffers to market fluctuations.

“I would be concerned about that,” he said. “I would prefer that money that is set aside for a particular purpose be used for that purpose.”