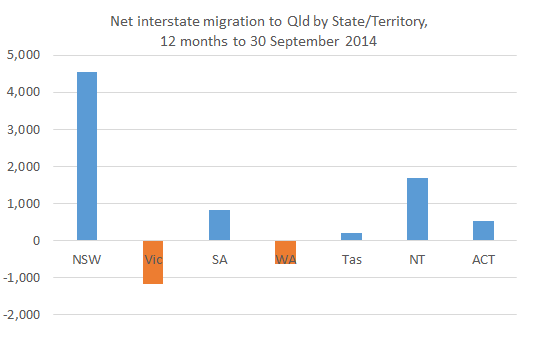 Yesterday I wrote about how net interstate migration to Queensland remains low, and today I’ve had a closer look at the new ABS data, breaking down Queensland’s net gain of 5,942 people over the 12 months to 30 September 2014 by State/Territory (see chart above). As I’ve commented before (see Queenslanders moving to Victoria), the net loss of people to Victoria is remarkable given Queensland was once the recipient of large numbers of interstate migrants from Victoria. Victorians were once attracted to Queensland because of more favourable economic conditions and cheaper property prices, but Victoria is now performing better than Queensland economically, and Queensland property no longer appears ridiculously cheap to Victorians. Further, I suspect Victoria would be gaining many recent Queensland university graduates, who would be attracted both by the employment opportunities and the cosmopolitan lifestyle offered by Melbourne’s inner city.