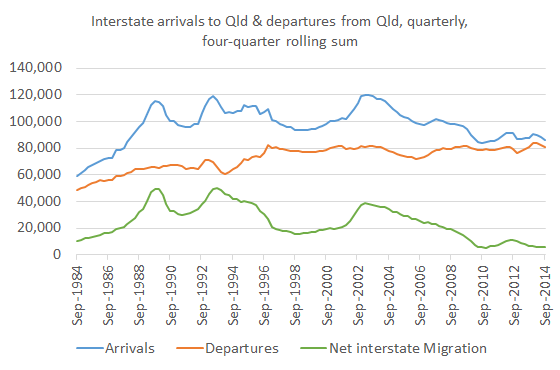 Queensland’s population growth has slowed to its lowest rate in 15 years, according to figures released by the Australian Bureau of Statistics (ABS) today.

“The sunshine state’s growth rate was 1.5 per cent in the year to September 2014.” said Phil Browning from the ABS. “While this is similar to the national growth rate, it is well below the state’s 15-year average annual rate of 2.1 per cent,”

“This slower growth is due to a nine year low in the state’s net overseas migration and one of the lowest net interstate migration increases in over 30 years.

I’ve been commenting for some time on how the big driver of our slower population growth has been the big fall in net interstate migration to Queensland. People from NSW and Victoria are no longer coming to Queensland in the large numbers they were, as job opportunities in Queensland have declined relative to other States, and the gap between our house prices and theirs is no longer as large.

When will interstate migration to Qld recover?