Queensland Treasurer Curtis Pitt has rightly labelled the upcoming 2015-16 Budget as “no frills” (see ABC news report). The Government cannot afford any frivolous expenses, because the budget challenge it faces is massive. The major problems the Government has are:

The 2015-16 Budget will include estimates for 2018-19 in its projections, and the Government will need to show how it will achieve the $1.7 billion surplus it will need in 2018-19 (see my comments on why a surplus is required and the debt reduction trust is a gimmick in my Black hole election presentation). This was always going to be a challenge. Recall the previous Government was only projecting a surplus in 2017-18 of $634 million, so the commitment in the Government’s fiscal strategy assumes favourable trends continue into 2018-19 and the surplus grows even larger.

Now, achieving the Government’s fiscal strategy appears to be an even bigger challenge, given the Treasurer’s speech yesterday can be interpreted as expectations management, preparing us for a Budget in which there is even less money to spend in the future due to revenue write downs, particularly of royalties.

The Treasurer is in an unenviable position. Revenue may not live up to expectations, but expenses, particularly in health, will rise inexorably. Health accounts for nearly 28% of the budget and the share is ever-increasing, as health expenditure typically rises much faster than other expenditure items (see chart below). Indeed, health wasn’t always the function the Government spent the most money on; once that was education. The Government will need to take a hard look at health spending and see if further savings are possible, if it is to give itself a good chance of achieving its fiscal strategy. 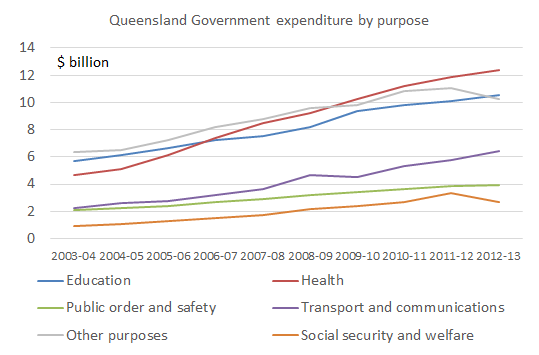